I wasn't going to post about this, but it's going through my head and I might as well get it out. I've written a few things in the past about live entertainment, and how much I think it is enjoyable to watch people on stage. It isn't that I don;t like movies or internet videos or such, but there is definitely something special about live entertainment, whether it is in the form of nationally acclaimed acts, local bands, or even grade-school musicals!

Anyway, I was reflecting on the entertainment at the local amusement park, Cedar Point, and I realized how fortunate I we locals are. Not only do I get to see the acts many times over the summer and fall, but I get to see some really talented performers! (Yes, I also love roller-coasters, but I don;t limit my enjoyment to JUST roller-coasters!) And it's really amazing to me that we get such talented young people at Cedar Point. I mean, yes it is s pretty big deal in the amusement park world, with rides people come from all over the world to see. But when it comes to singing and dancing, well...it isn't New York or L.A. after all. It's middle-of-Lake-Erie Ohio. 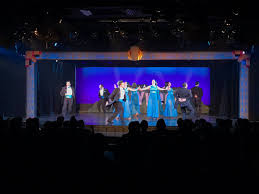 Let me squeeze in one example from this year, and this isn't to denigrate any of the other fine acts, it's just the show I got to see the most. Last year I commented on how much I enjoyed the watching the cast of Bandstand, USA, the show at the Jack Aldrich theater at the front of the park. So this year the theater had an all-new show with an all-new cast. Did I enjoy it as much? Well....I don't think the new show was better...or worse. It was just different. I think this year's show, Lights, Camera, Action, was technically more difficult (and maybe the most complex of these musical review shows I've seen at C.P.) especially some of the complex vocal numbers. The performers really sounded great! And I really looked forward to seeing everyone each time I visited the theater.

So big kudos to all the live entertainers out there, and special thumbs up to the cast of Lights, Camera, Action as they go on to other projects! I anxiously await the next round of shows this fall. (As well as some high school band performances!)
Posted by Steven at 11:17 PM No comments:

Some more examples of my acrylic paintings. 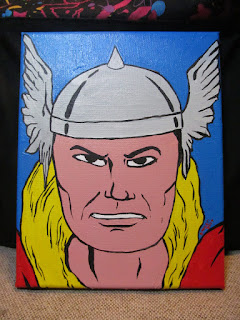 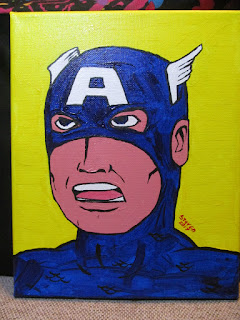 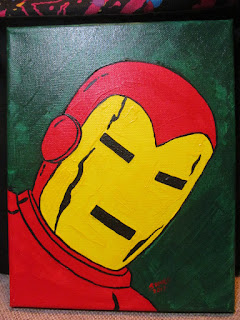 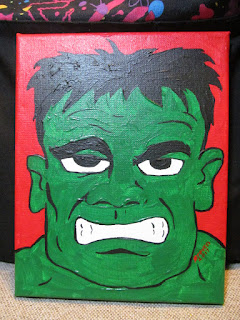 When I get around to it, I may do Hank and Janet next!
Posted by Steven at 8:08 PM No comments:

I'm going to talk a bit about a comic series I have been reading lately. That is, the classic Marvel Team-Up comic, mostly featuring Spider-Man. I picked up the Essential Team-Up Vol. 1 & 2, and am just about finished reading Vol. 2, and I had some thoughts.

First, this is a hard series to recommend unless you are a real completist for the adventures of Spider-Man or the Human Torch. There's much potential in a team-up style comic, but it takes a while before Marvel Team-Up gets its legs.  The original concept of the book was just a Spider-Man/Human Torch buddy book, but that was scrapped early on in favor of Spider-Man and a different guest-star every month, with the occasional issue featuring the Human Torch and a guest. Still, the stories were pretty pedestrian and the really reads at first like the 2nd or 3rd tier Spider-Man book that it was at the time. (Spectacular Spider-Man premiered in 1976.)

As I said, there is some potential in a Team-Up book. I think the best team-up stories involve characters that are B and C listers that could never maintain their own titles, but are interesting to visit. The team-up book is never going to have the most important events in the main character's life, and doesn't involve the key villains either.  For instance, Peter Parker won't get a new job or a new girlfriend or have a showdown with the Green Goblin, but it CAN have important events in the guest-star's life.  Personally, I think Marvel Team-Up really takes off when Bill Mantlo comes aboard as writer. He takes Spider-Man to some starnge places and times, and teams him with the likes of the Scarlet Witch and Moondragon, instead of Iron Man or Thor. Plus you get great art by Sal Buscema, who could always draw any character in any story and had impeccable storytelling skills!

There are some classic runs of Team-Up including early Chris Claremont/John Byrne and a great run written by J.M. DeMatteis. This is the first I've read the early issues, and though it hasn't been as much fun as other Essentials, its interesting seeing the evolution of the comic as it found its way and became a true classic. I did read the end of the original run, which lasted 150 issues, and I was sorry to see the title end.