Today I continue my look at season 4 of the webseries Out With Dad. Episode 4.17 returns our story to Vanessa's counselling sessions, and she looks to be feeling much better about herself. She talks of the assault by Kyle in the flop house, and how it made her feel scared and stupid. She mentions Kayla but doesn't go into details about their physical encounter. The counsellor convinces Vanessa she did the nest she could in the situation. I think this is important, as there is a lot of "Monday morning quarterbacking" when you've made some bad decisions. It's easier to determine alternatives after the fact, but hard to come up with them on the spot. 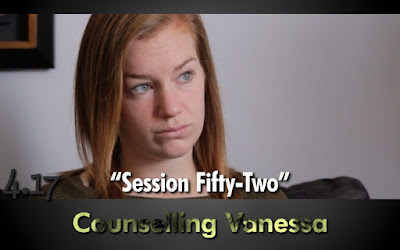 Vanessa seems to be healing well, and I'll add that Lindsey Middleton is just about perfect as always in these counselling episodes. It's really just her, acting with her expressions and voice, and going through a whole gamut of emotions, and it's amazing as well as sad to watch.

Now, as for "Without Regret", episode 4.18. Well....we have Out With Dad's first sex scene. And honestly, I'm not sure how comfortable I am discussing this. But it is handled with grace and humor by (writer/director) Jason and (Rose and Claire) Kate and Caitlynne. But it is a dream come true for the characters and many fans. After discussing polyamory, we switch scenes to Rose finding out her dad has (probably) had sex also (yes kids, old people can do it too). Then we segue into "Freindsgiving" preparation and a surprise appearance by...Vanessa! Two! That is, "shaved-head" Vanessa, and Rose's current love interest. Rose, surprisingly (to me anyway) jumps at the chance to spend time with Vanessa II. 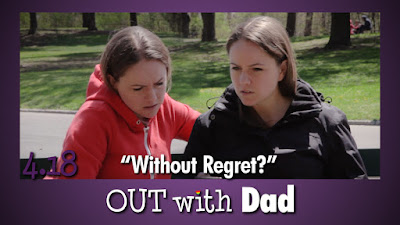 Okay, this episode is funny, charming, and propels the story forward in some pretty big ways. It also leaves you wanting more! And I just love the little in-jokes, that those who haven't followed the extra creator comments might not understand. I speak of Alicia's never-seen boyfriend and some people not liking musicals. Me, I'd love to live in a musical.

And I love this series. Still going strong!
Posted by Steven at 10:27 PM No comments:

I finally got around to watching Captain America's 3rd Marvel Movie installment, subtitled "Civil War" after hearing it praised a lot since its release last year. Here's my take:

1- Captain America? This is the least "Captain America" if the movies featuring Steve Rogers. It's really much more of an Avengers movie, with a slight focus on Cap. It does a little bit of furthering along of Steve's private life, with the death of Peggy Carter and Steve finally, sort of, getting together with the pretty girl we all knew was Sharon Carter. But even this seemed rushed. The bulk of the character arc for Cap is his unyielding support of childhood friend Bucky Barnes, aka the Winter Soldier.

2- Villain? The villain's plot in this movie is ludicrous! Obviously framing Bucky, leading to harsh controls of the governments over the Avengers, leading to Captain America and Iron Man in a big fight. There's just no way the villain could have known the consequences of his actions, and the final confrontation is way too convenient! Plus, they waste a great comic character name: Zemo. Instead of a great Baron and Nazi leader, he's some ex-military man with no means whatsoever to pull off his plan.

3- Civil War? I didn't read the comics, and though hero-vs-hero conflict has been a Marvel staple, making it into the main conflict of a movie is not a great idea. They'd be better off bringing in the Masters of Evil or some other great villain. The hero conflict in Avengers was about perfect, we don't need more.

1- Vision and Scarlet Witch!  The development of these characters, their conflict and obvious attraction, is the most interesting sub=plot of the movie. It's far more interesting than anything that happens with the main character (see above).

2- Spider-Man! Though not much of an intro, the reboot Spidey shows a ton of promise. The only bad thing I have to say is the repeated references to how hot his Aunt is (She IS, of course, but I noticed without being told. Marisa Tomei--call me and we can discuss this in-depth!) 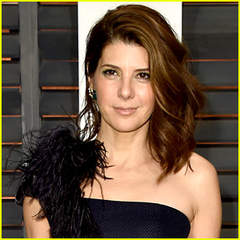 3- Black Panther! Just a totally awesome introduction. It's all great, nothing bad here at all!

4- Characters! The character arcs for everyone else were also very well done. even folks like Hawkeye who don't appear much. Gi-Ant-Man is probably my favorite.

I'd rate this a very average Marvel movie, Not as good as the other Captain America movies, Iron Man I, or Avengers I. But definitely worth seeing.