Review: Out With Dad 4.16 “Reconciling with Claire"

I was just about to get back to talking about my favorite webseries, and the newest episode was just released for general viewing also.  So here goes!

This episode is the one everyone has been waiting for. Well, except "team Vanessa". That group is waiting for something else. But it is a huge episode for all fans.

The episode begins with Rose reluctantly visiting Claire, the "ex". The encounter goes along about as I predicted and hoped it would, at least at first. Claire is more than friendly towards Rose, and their past relationship is downplayed for being a "teen thing". I like this because it fits Claire's personality to not be hung up on the past. Though viewers of the series get obsessed with the relationships of the characters, people in real life have relationships and they end. Sometimes we never talk to these people who we thought were so important again. But we shouldn't dwell on such things and we should be forgiving. Claire's "we were just kids" attitude is very fitting. 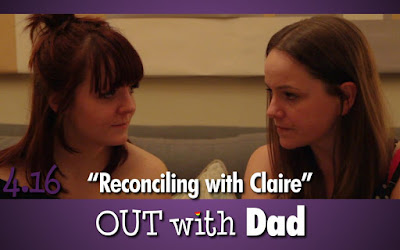 Rose's fear and regret fits her personality also. But she does put too much pressure on herself, and, in a way, she gives herself too much power to affect others. Also, shame on her for not knowing how to play chess.

I like the conversation about true love and the complicated relationship Claire is currently in. It's also interesting that Claire considers Rose/Vanessa "true love". Is she being uncharacteristically deep, or is she rationalizing? It certainly seems to have made her feel better to believe that she was left behind for a "true love" to come together. Rose is less sure. We shall see what happens in the future.

Oh, and "I forgive you Rose Miller" may be the most powerful line of the series!

As I said, the episode went along as I expected. Then there's the ending. Didn't see that coming!!  Whoa!!
Posted by Steven at 9:43 PM No comments:

This post is my update as to why I've been so busy and haven't posted anything lately. I've been preparing for a new Comic Convention. Halloween Comic Con is a comic and gaming convention coming up on Saturday, October 22nd in Sandusky, Ohio. The hours are 10-6 and I'll be there all day!

I've been doing some painting, and have some new comic-oriented pieces that will be for sale at the con. I've also been busy keeping up with my webcomics, "Mutant Elf" and "Mutant Animals vs Zombies vs Machines vs Humans". Check them out by clicking links to the right of my blog posts.

I'm also getting close to finished with a strip for "OH, Comics", the anthology that will be available at the SPACE convention this Spring.  "OH, Comics" is always fun and I'm proud to be a part of the publication every year.

Finally, I updated this page with links and updated my biography. I have a new position this year (same place, different area of instruction), and I'm loving it but adjusting, so preparation takes more time than in the past. 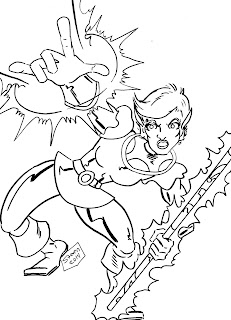