I may have mentioned here or elsewhere that I’ve been doing some collaboration with other comic creators.  One of these is a story I drew that appear in Squad Car #2, published by Capricorn Comix .  It will be available a week from today at Genghis Con in Lakewood, Ohio (near Cleveland).  It can also be ordered from or you can e-mail me (fedscomic@yahoo.com) if you would like to purchase a copy! 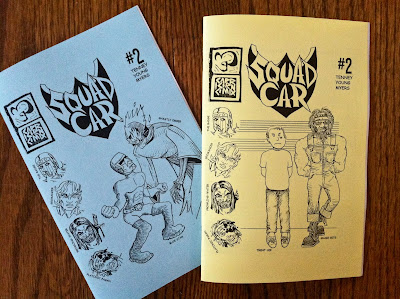 I’m really looking forward to Genghis Con, which has free admission so there’s no reason not to come check it out!
Posted by Steven at 7:30 PM No comments:

It’s been many a month since I commented on my favorite webseries, Out With Dad, so I think I’ll start to catch up now.

Season 4 continues every month.  I haven’t commented on an episode since “An Island Outing” in July.  August’s episode was called “Reconnecting with Owen”.  It’s a bit of a strange title, because although Rose spends this episode reconnecting, we the viewers haven’t seen Owen before, so we are being introduced to him, not reconnecting with him.  But the show isn’t about us anyway, it’s about Rose.  And Dad. 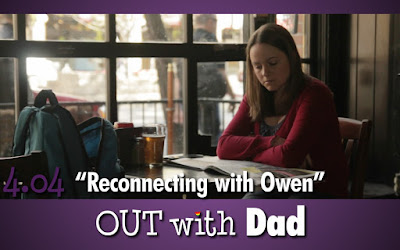 Owen is an old friend of Rose’s who is slightly older and has an obvious physical disability. We know he is not very limited by his disability because we quickly learn he drove across Canada by himself.  And Canada’s a pretty big place.  Owen is taking business classes. Owen doesn’t seem like a business person, but he seems a little aimless also, so I doubt he’ll get a business degree.  I think it’s interesting that Rose is studying journalism.  It does seem rather front-and-center a major for the self-professed shy person.  Also, Rose claims her high school grades weren’t great, which seems to contradict her previously established intelligence.  Perhaps her grades fell due to other circumstances distracting her?

By the way, the camera work during Rose’s telling of her high school Vanessa relationship is great!  It really emphasizes the hectic thoughts as Rose tries to explain it all to Owen.  His reaction is understandable.  Hopefully we’ll see more of Owen soon.  He seems really cool, and also I think he’s the guy friend Rose needs to talk with – the role Kenny used to fill.

Well, I’m one episode closer to getting caught up!  I’ll try to keep the reviews coming!
Posted by Steven at 10:31 PM No comments:

It’s been too long since I posted here on my blog.  I have a weekly goal, but life keeps getting in my way and I put off my posting.  Anyway, I still have a goal of getting new stuff here weekly, so maybe I will maintain that goal starting now!  I’m strangely talking about something that just ended today, but I always have a Halloween-oriented post, so this is my October reminisce. 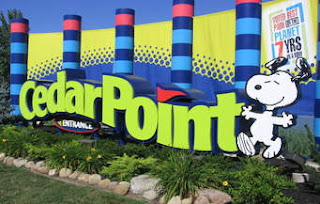 My topic today is a bit different than my usual subjects, but I wanted to talk a bit about Cedar Point’s Halloweekend live show “Spooky Shenanigans”. First, let me explain to anyone who doesn’t know that Cedar Point is an amusement park here in northern Ohio.  Since I grew up in northern Ohio, I often say I grew up at Cedar Point.  I love the rides, especially the roller coasters.  But now that I have a family and the other members aren’t as excited going really fast really high, I spend considerably more time watching the live entertainment than I used to.  Yes, it’s not that I’m old and can’t handle the big rides as well as I used to, it’s just that I’m spending time with my family. Yep. That’s the story I’m sticking with.

Anyway, Cedar Point does this really nice Halloween thing in the fall called Halloweekends.  There are lots of really scary attractions with monsters screaming at you and intense scenes of horror.  But there are also some less scary, more family-friendly attractions that are just plain fun.  The best of these I’ve seen yet was this year’s Spooky Shenanigans live show.  The show featured some great costumes and characters singing and dancing their ways through the best ever setting:

The 1980s!  In High School! Yes!  Only the greatest decade ever--at least for pop music!  The show was a great nostalgic experience for me, as I was in High School in the 80s.  In fact, I think I knew a girl or two just like that Spidora chick!  The song selection was excellent, and they were performed extremely well by the cast.  We’re talking about a section that begins and ends with Huey Lewis and the News!  This show had me getting out my CDs and listening to some classic tunes! Nostalgia alone can’t keep my interest for too long, so I must also praise the cast of characters.  Each monster had his or her own little personality, which were so fun to watch as they interacted throughout the story-line.  My family and I noticed a lot of little touches, ad-libs, and subtle differences in the performances.  I must reiterate I’ve never had so much fun at a live show.

In general, I think Cedar Point has done a great job with live shows in recent years. I love the live bands throughout the park and on the beach, the theater shows are top notch, and the big nightly show (Luminosity) is awesome.  In many cases, I think the performers are so good I can’t believe they’re working at an amusement park!

Okay, I’m going to finish my rumination here.  I will try my hardest to keep this blog active.  I have a comic show at the end of the month to prepare for*, so hopefully I can post some previews of art I’ll have available there soon.  I just need to keep enough time aside during my preparations to keep blogging.  Though I’ll have a little more time since I don’t have Spooky Shenanigans to watch anymore.

*Genghis Con in Lakewood, Ohio on November 29th
Posted by Steven at 11:09 PM No comments: