Some people know humor.  Sequential humor.  Kel Crum is one of those people.  You can see a lot of Kel’s unique look at things on his website, including some art jams he manages to pass around conventions and get rubes such as myself to participate in.  I picked up a new collection of Kel’s work at SPACE this year and it’s high time I said something about it here.


Scribbles no.2 features the tale of Ronald Muck and Friends.  If you can’t tell, this is a parody of a certain water fowl who had a rich waterfowl uncle.  The story includes Uncle Scrog bashing his head while trying to dive into his money and some dog-humans who want to steak his wealth.  The humor here is adult, I should warn you, but if you’re an adult, you will laugh.  There are a couple other tales of cartoon ducks and a couple strips with two of Kel’s recurring characters: Cornelia, a mousy social misfit girl and Ed Thud, a guy who tends to get into trouble.  I’d tell you more, but I don’t want to give away any of the jokes!  Kel even draws things funny.


Anyway, check out some of the example on Kel’s aforementioned website.  If you don’t laugh at least once, it’s okay to come back here and yell at me.

Well, I’m still rather tired after a big weekend at Motor City Comic Con, but I’ll try to say a few words about the show.  First, the show is absolutely massive!  The amount of talented people and the amount of attendees is truly amazing!  In fact, the attendance was so big this year is caused some trouble on roads leading to the convention center!  I do feel sorry for people who waited for hours to get into the show, but I hope they had a great time once they got inside.


Personally, I had a blast!  I talked with some great people, including the legendary George Perez, one of the greatest comic creators ever and the inspiration for many of my recent statuary work!  The other creators around me were great people and interacting with them made the experience fantastic!  The people who came by my table, whether they bought something or not were friendly and kind.  But an extra thank you to those who did buy something!  I am still rather awed that anyone would want to own something made by me, and very flattered that people are willing to pay some money to own my work!  Thank you, thank you, thank you!!  I’m not awed that people want to buy my wife’s creations, especially the crocheted Cthulhus, but I still thank you and so does she!  I also would like to acknowledge all the kids who show interest in the stuff on my table.  There are plenty of adults (young at heart) who buy from me, but the work that covers my table is especially kid-friendly and I love their reactions and questions about my work.


I also tried to promote my upcoming Out with Dad comic (see here for details) to as many people as I could.  Most sounded impressed so I hope they check out the series and spread the word!  And hopefully, next year when I see those folks, they can give me their reactions and reviews!


Speaking of reviews, I picked up some more comics at Motor City by some really cool creators, and I will need to review them here in the future.  I have barely started my reviews of the comics I got at SPACE last month, however, so I hope you’ll all be patient with me!


And I think I’ll end today by posting some pictures of statues I made especially for this event! 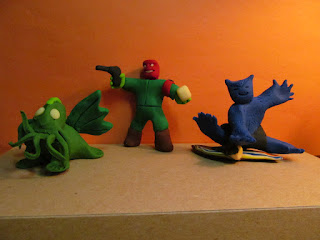 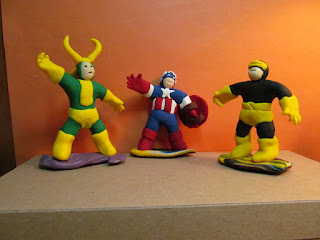 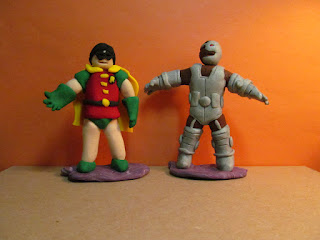 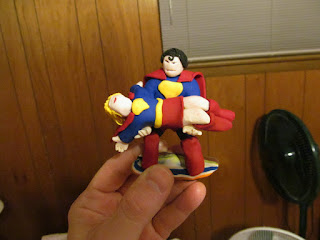 Blink: So It Goes 2- To go with this Door Knob, The Rough Cut Edition is the almost complete next chapter in the continuing saga of Blink.  Blink creator Max Ink puts together a wonderful tale and I think I loved it more because it is an opportunity to see a work in progress.  As an artist, seeing how someone else works is always interesting, and Max’s work with pen and brush is amazing.  But I get ahead of myself.  The reason this is the “Rough Cut edition” is because Max wanted something new out at the SPACE con and he wasn’t quite finished with this book.  It does include all finished dialogue and the characters are all finished inked.  The backgrounds are not all finished however, but they aren’t so vague as to make it hard to tell what is going on.  So, if you’re interested in Blink (and you should be!) I wouldn’t wait for the final version if you get a chance to buy the Rough Cut Edition. 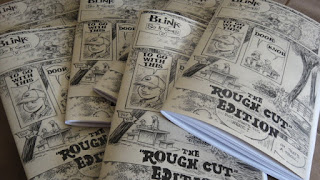 As to the story, it features Merle, also known as Blink, as she meets some new characters and converses with them about things including life, being homeless, and Blink’s friends Sam and Hank.  Long-time Blink readers may be a little disappointed to not see Sam and Hank during the story, but they are present in the plot even though they are not physically present.  I don’t know what else to say about the story, because I think you really have to read it yourself to understand it.  But I will give away my favorite line.  It’s a description of Blink and Sam’s relationship as “A joy to behold”. 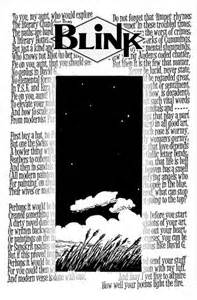 Max’s art is great.  The backgrounds, based on real locations in Columbus, are meticulously rendered and really bring you into the story.  The characters’ expressions are right on, and the storytelling is great.  You can tell Max really loves this work and puts a lot of effort into its’ creation.  I’d even say the book is “A joy to behold”!