I've been reading through my stack and just finished the most recent Resident Alien mini-series, The Man With No Name. I've been saying for the past years that Resident Alien is my favorite current comic series. I'll try to explain why as I discuss the latest chapter in the life of our stranded alien.

Writer Peter Hogan and artist Steve Parkhouse have produced 4 Resident Alien stories since 2012. Each story consists of a 4-part tale furthering the story of Harry (who's real name is Hah-re) while also revealing more about his origins. Also, each tale involves some mystery that Harry must help solve. In this way, the series is really a mash-up of a Science Fiction and a Mystery book. The combination works great, because each chapter so far has moved the story along enough to keep things interesting. 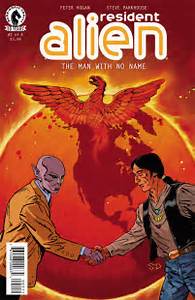 The most recent mini, The Man With No Name, for example, continues the subplot of the government agents that are tracking down Harry. We know they have a lead, and they are closer than they realize. But the Feds are still unaware of how close they have come. In Patience, Harry is faced with the death of a drifter, and his cryptic last words to Harry. Harry must, of course, find out the secret of this man.  Most importantly for the advancement of the story, is Harry meeting Asta's father, Dan Twelvetrees. Despite Harry's initial misgivings, the two become friends and confidants despite Dan being able to see past harry's telepathic deceptions. The only strange thing to me is the impression some have of a romance between Asta and Harry. This is strange because Harry is supposed to be an elderly doctor. Quite older than Asta from my interpretation. In reality I think he's really old, since he spent some time in suspended animation. But that could also make him not so old. There's also some police action in this one! And then there's Honey's picture. She's the little girl from last series who can also see Harry as he really looks. But Harry doesn't know that...yet!

Again, I love the way the series keeps things moving. This isn't a story that sits still. Things change and evolve. Yet, there's still the same plot of a mystery for Harry  to solve, and the reader trying to figure it out before he does so.

Everyone should be reading Resident Alien!! It really is that good!


In other Alien notes, I've been re-reading my Alien Legion comics this summer. Alien Legion was created by Carl Potts with Alan Zelenetz and Frank Cirocco for Marvel's old Epic line back in the 80's. It's a thoroughly enjoyable read. A war comic set in another galaxy, with lots of cool characters and events. Several other writers and artists have worked on the title, and I've enjoyed each one's take on the group. The comics have been reprinted as trades, notably from Dark Horse and Titan publishing so you can get them even if you can't find all the old comics! 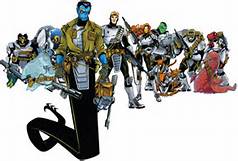 Aliens are cool no matter how you get them, but I recommend the above to start!

Posted by Steven at 9:37 PM No comments: