Guardians (sculptures) of the Galaxy

I thought I'd take a break from writing long reviews this week to show off the other stuff I've been spending a lot of time doing lately.

Of course, statues, including custom works, are for sale!  E-mail me at fedscomic@yahoo.com for details!
Posted by Steven at 9:12 PM No comments:

Out With Dad, episode 3.17 is called Out With PFLAG part III.  If you’re wondering how that title follows the previous episode, you are forgetting that part I and II of PFLAG occurred last season when Rose and Nathan attended their first PFLAG meetings. It was the first episode of OWD I wrote a real review of, which you can read here.

This is very long episode, coming in at over 20 minutes including credits.  But with so much happening this time, it certainly doesn’t seem long!  This episode begins with Rose and Nathan entering and greeting Claire and her Mom.  This is a good nod to the first PFLAG episode, where Rose is surprised to see “the girl from the washroom”.  But there is a surprise attendee, and it’s Alicia, coming along to learn what she can do to be a “straight ally” to her friends who identify otherwise.  I can relate to her feelings, but more on this later. 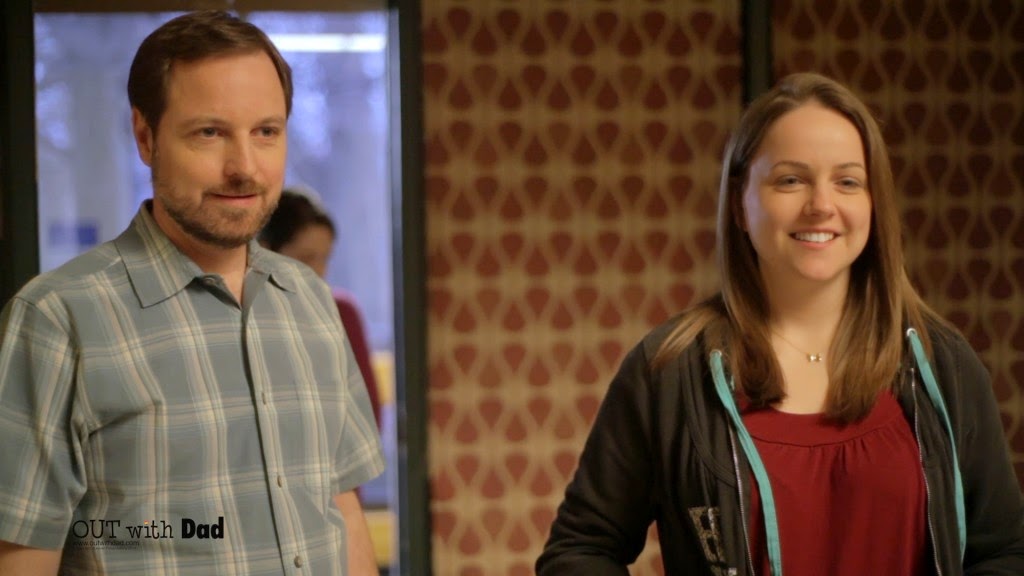 After the girls greet each other, the meat of the story begins as new leader Robin initiates the sharing with the story of his cousin.  Said cousin was excommunicated by his family after coming out, even when he was dying of cancer.  This story reminds me a little too much of Vanessa’s family.  Not only because of their unacceptance of Vanessa’s sexuality, but of the way they abandoned their eldest son when he married outside of his faith. I can’t imagine anything short of a major crime would make me cut off communication with one of my children. Robin also comments on how attending the sharing meetings, listening and sharing, makes him feel better about things.

Morgan comes next.  I have a small problem with the presentation of Morgan’s story, and it has everything to do with continuity.  Morgan implies that he was quiet and looked very bad during the last meeting.  By this, he is referring to PFLAG meeting from last season.  But that would, in OWD time have been months ago (last school year).  Therefore, either this is a stretch by Jason to help us remember Morgan, or PFLAG only meets every few months.  Which I guess is possible.  It just seems unlikely.  Anyway, that’s way too much time to discuss such a trivial matter that doesn’t affect the plot at all.  Morgan identifies himself as trans and tells of begin raped and beaten by a bunch of drunk guys.  It’s a horrible story, and difficult to listen to.  But it’s well written and told.

Sam’s tale of literally being in the closet is much lighter than Morgan’s but also rather tragic.  Though no physical harm was done to her, having to hide her true self from her girlfriend’s family has left her with some mental problems.  What if Vanessa had chosen to sneak around with Rose while hiding the relationship from her family?  I don’t think Rose could have handled such an arrangement.  I also think this type of relationship is rather common, and I have heard first-person accounts of such.

Alicia speaks next, and sound just like I would if I were to go to a PFLAG meeting, I think.  Though I try to be an ally of the LGBT community in my words and deeds, I’m sure I would be at a loss for words in a meeting centering on the experiences of people who are not straight.
Claire mostly recaps recent events at school as well as expressing how nice it is to share such things with people who will listen and support her.  This is the first that Rose hears of being banned from the changing room, however. Rose continues this discussion of the difference between how non-heterosexual students are treated at school-especially Catholic School- compared to the friendly atmosphere of the sharing meeting.

Claire’s mom discusses learning about her daughter and how she isn’t allowing her husband to wreck things, even if he isn’t as receptive as she is.  This is eerily different from Vanessa’s father going along with his wife, when he seems more open to wanting to be supportive.  Nathan discusses the unfairness of how Rose and Claire are treated compared with the other students.  This is important.  I think it’s important, for instance, to speak not of “gay marriage” but of “marriage equality”.  Because that’s what it’s really about, right?  Everyone should be treated fairly, no matter what.  It sounds like Ontario, Canada is ahead of the USA in making sure people are treated equally, even in a religious institution.  Religion has repeatedly been an excuse for bigotry here in the United States, including in my state, which isn’t even close to the south.  Heck, I’m just a boat ride from Canadian soil!  Anyway, this discussion of the school and changing room will lead us into next episode.


By the way, Rose referred to herself as a lesbian!  Good for her!  The “L” word was one of the most interesting parts in the “lost episode” I got to transform into a comic.  Though the whole comic is up on the web, I thought I’d quickly mention I’m starting to post some extra art and pages on the comic fury site.
Posted by Steven at 11:05 PM No comments:

Review: Out With Dad 3.16: Stressing Out

This week I look at episode 3.16 of Out With Dad, my favorite webseries if which I’ve discussed here in depth a lot in previous posts. “Stressing Out” involves mostly Rose’s school. This episode hits me rather hard because I am a teacher in real life, though I work in a public school that is not subject to some of the prejudices as Rose’s school environment.  Granted, some of the views in this story do crop up in all schools, but not in the particular area where I work.

The episode begins with a conversation between Rose and her dad.  He knows something is bothering her and tries to figure out what.  Rise attempts to skirt the issues, but reveals a bit too much in the process.  The first thing Rose talks about is the dance tickets Claire tried to buy for them.  Rose insists things between her and Claire are fine, though the attempt to buy the tickets does bring up a thought to me.  Rose and Claire make such a nice couple, in part, because of how the complement each other.  Claire is more vocal and out, while Rose is quiet and shy.  However, this has caused some friction already, and could signal trouble in the long term.  It depends on how much Rose can come out of her shell.

Anyway, Nathan wants desperately to help Rose, but she doesn’t want to be the center of attention at school, so she’d rather put up with the discrimination hoping people will eventually forget about it.  At school, we find Rose is afraid to enter the changing room before gym, and would rather be late for class than face the homophobia of Brittney. 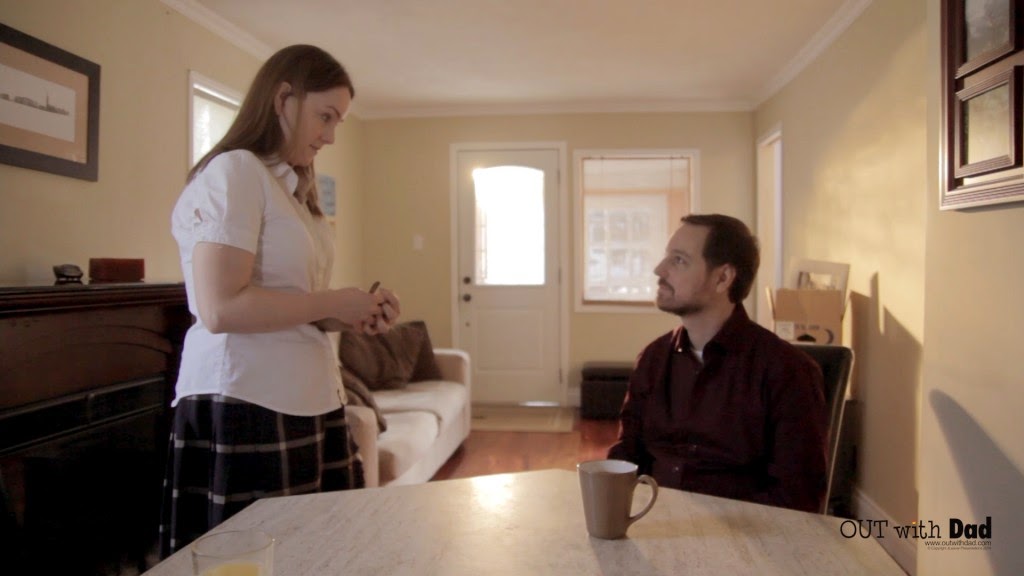 Then Nathan gets THE PHONE CALL.  The gym teacher is calling concerning parents not wanting their daughters changing in front of Rose.  The teacher’s idiotic solution is for her to use the staff change room.  Nathan is understandably incensed.  The solution hits me this way: in order to have equal access to the education of heterosexuals, it is necessary to have homosexuals separated.  You know, because separate but equal works so well. Nathan demands action, but wants to keep things from Rose.  Certainly so as not to upset her and so that she won’t be getting the extra attention she doesn’t want.

The final scene includes the wonderful return of Alicia.  Okay, she hasn’t really been gone, but she hasn’t done much this season…so far.  But I like the interaction between her and Rose.  Rose had mentioned in a video diary that she thought Alicia was a bit stuck up and kept Rose from spending time with Kenny.  At first, Rose seems rather cold towards Alicia here, but when Alicia asks about Vanessa and offers to put up posters about her, Rose sees to thaw. Then, when Claire arrives and the Fall Formal comes up in conversation, Alicia offers to boycott as a sign of solidarity.  Finally, Alicia asks about PFLAG.  She really is quite a sweet girl, that Alicia.

By the way, Rose tries to get Claire to go to the dance without her, but Claire will have none of it.  Kenny is all for skipping the dance also.  These people really care about Rose, but I don’t think she’s reacting well. In fact, Alicia, Kenny, Claire, and Nathan all seem to have the right ideas throughout the episode. Rose, however, has not responded to her difficulties well.  Ignoring a problem and hoping it will go away, plus refusing the help of others?  Not very good, Rose.  I know it may be hard to be in the spotlight, but I think you have to do better.  Would you want the next girl to come out to be treated like you have been?

Finally, the episode ends with Claire giving Alicia her MOST ADORABLE LOOK YET!  I love this show!
Posted by Steven at 11:21 PM No comments:

I’m going to talk about the final third of the third season of my favorite webseries, Out With Dad.  I’ve been viewing and re-viewing the episodes, so I guess it’s time I review them. First, I think I’ll make some general comments about the series. I really do think season 3 is the best Out With Dad yet.  I say “yet” because I really hope there will be more. Mostly because I really love these characters, and I just hate sating “goodbye” to them.  But also, Out With dad isn’t just about these great characters, but how they deal with issues that beset people who are LGBT and their families and friends.  The situations challenge the characters and make the viewers care about them. 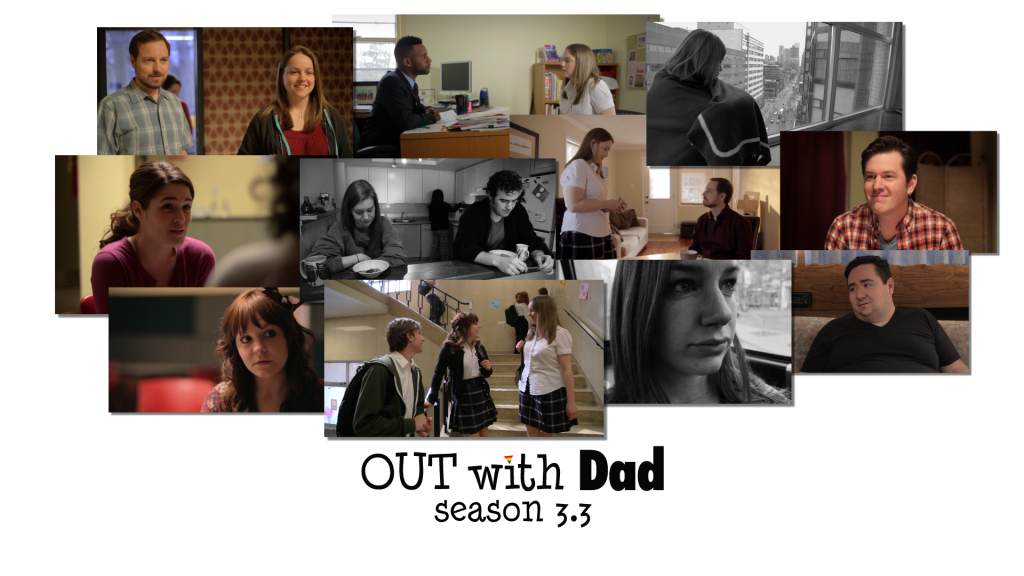 Season 3.3 begins with episode 3.15, “Vanessa’s Calm”, in which Vanessa and her brother Matthew discuss her problems over a breakfast of dry “crap” cereal.  Vanessa explains what has happened between her and Rose, and is shocked at how well her brother handles the news.  She speaks of her envy for Rose, because Rose has support from her dad despite being out, while Vanessa gets no support at home despite having 2 parents plus. The most interesting point in the conversation for me is Vanessa talking about Johnny. She states how Johnny being openly gay always made her feel uncomfortable.  I guess this shouldn’t surprise me so, knowing the views Vanessa’s parents have and that she’s certainly been taught that since she was small, but seeing Vanessa being such a victim lately, I haven’t thought about her prejudices. 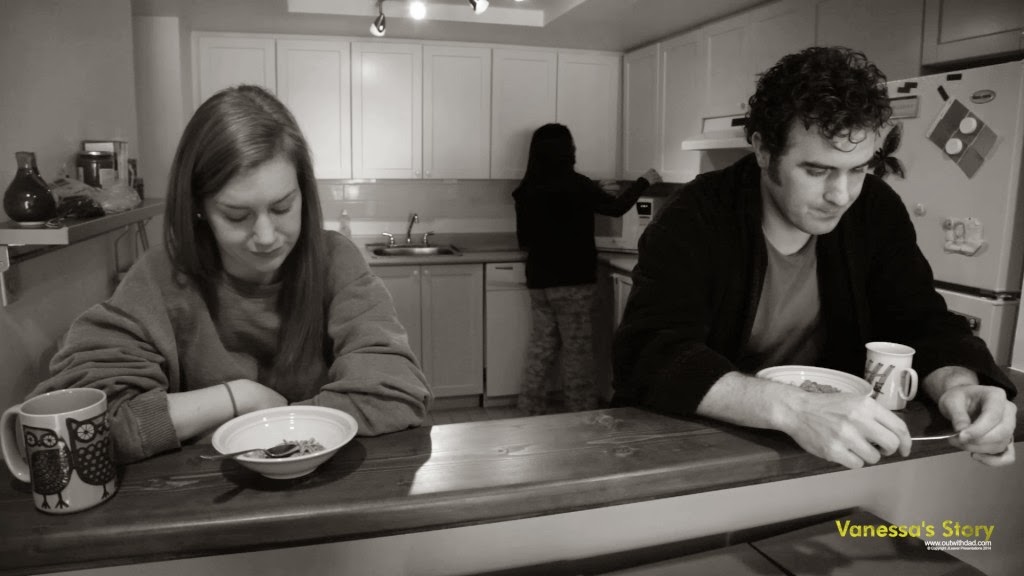 Speaking of prejudices, Matthew is introduced to the idea that gay people can be Bi-Phobic, which is one of those things Out With Dad has brought to my attention that I never thought of before.  The episode winds down with the setup for Vanessa to meet Sera, a character from another webseries with an LGBT theme.


I’ll discuss that episode later, but I’m going to get back to Rose’s story next.
Posted by Steven at 10:42 PM 1 comment: