Instead of something art-related, I’ve decided I’d like to comment a bit on acting and related things.  I’m mostly going to ramble about whatever topic comes to mind. Which is mostly what I do on this blog anyway.  Hey, if I’m not getting graded, what’s the point of doing a rough draft?

The main reason I am at this time commenting on this topic is because I recently saw a local High School musical presentation.  I must say, watching a bunch of kids put on a musical is great fun.  I’m amazed that a group of students can pull it off, and do it so well!  And I give lots of credit to the teachers and adults that somehow get it all together.   There’s something special about seeing these types of performances, especially because they are live in front of a lot of people, and most of us non-performers could never make it through such a stressful, pressure-filled situation.
Speaking of live performances, I think there is something super-special about seeing people act on stage.  When filming, you can do take after take to get the scene “just right”.  With live performances, you practice as much as you can, then you get one chance to get thing right! And I like to see how thing go when things don’t go right! I don’t mean that in a mean way, and I’m not making fun of those oops moments on stage.  Rather, it’s fun to see how the actors cover when things don’t go as planned.  It takes some quick thinking and really shows how good an actor you are when you have to improvise!

Finally, I’d like to mention my acting experience.  I haven’t done any on-stage work since 6th grade.  I had the lead in the grade-school musical that year (it’s true!), but I didn't continue to pursue acting or singing later in life.  Though I am a teacher, so I guess I do perform in front of an audience all the time.  I certainly don’t have singing or dancing talent, so musicals wouldn't have been in my future.  And even acting in non-musical plays was too intimidating for me.   I’m more of an art person.  But I am extremely impressed by those in drama, and I’m thankful to all those who've brought me such enjoyment over the years.

Well, that’s plenty of rambling for now.  Next week I’ll have some art-related comments!
Posted by Steven at 12:03 AM No comments:

The SPACE Anthology for 2014 is now available for download!  SPACE is the Small Press and Alternative Comics Exposition, a small press comic convention I will be exhibiting at April 12 & 13.  See the link below to download the anthology and get tickets to the show!

Here's the cover, with Myzla and friends right next to Mike Carroll's Bolt, Drip, and Ninja!  I'm honored to be in such great company!!

http://www.backporchcomics.com/space.htm
Posted by Steven at 9:47 PM No comments:

So, it’s about time I wrote up a review of the final episode of the first block of season 3 of Out With Dad.  The episode (3.06) is called “Out with Song (and Dance)”.  And I must say this is the BIG one!  Which is exactly what I said about the last episode (“Outed”), but is no less true.  “Outed” was the BIG one because of the events that occurred in the episode.  “Out with Song (and Dance)” is big because it’s an amazing musical event!  I think it is my most favorite episode of anything I’ve ever seen!!  It was very unexpected to see Out with Dad, this little webseries from Toronto, create a musical extravaganza for an episode.  Both the song and the production are amazing!  This really was far greater than anything I would have thought possible for a web show like this.  I want to know how they did it.  A behind-the-scenes documentary would be great.

There are so many little things that make this episode so good.  I’m going to try and cover some of these little things.  But first I’d like to mention the big thing.  The song that the crew of Out With Dad composed and recorded for this episode is excellent!  “I Don’t Care Who Knows” is catchy, does a great job summarizing Rose’s situation, and has a great theme that it shouldn’t matter who knows about Rose’s sexual identity.  What matters is that she’s the same great person she always has been!


Now for some of those little things that I love about this episode:  First, I love the conversation between Rose and Claire at the beginning of the episode. Claire is positive and understanding, while admitting the future will not all be easy.  Also, we get my favorite piece of Claire dialogue ever: “I know EXACTLY what I was thinking!”  Next there’s the little animated bird.  The bird is a great touch and is a perfect transition from the conversation to the fantasy musical that is about to occur. Another of the little touches I love is the inclusion of the “Girl on the subway”- though she’ll probably never really be met by Rose again, her brief presence was very important in Rose understanding her own identity.  I also liked the way Alicia slid in next to Kenny.  Kenny’s sung dialogue is very good by the way—very fitting his character.  And, though I’m almost positive it was unintentional, I love the way Nathan isn’t in synch with the other dancers. It fits the character perfectly. And the interlude and coda with Vanessa were heartbreaking.  The fade to black-and-white was a perfect touch. 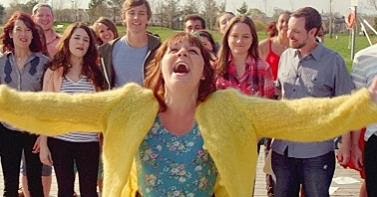 I have to mention that mega kudos go to Caitlynne Medrek, who really showed her talent in this production.  Everyone was good, but her performance was tops! And finally, I don’t know if it’s the lighting or her smile, but Kate Conway never looked as adorable as she does in the opening sequence.


I can’t get enough of Out With Dad, and I’m pretty sure new episodes are not far away!  Awesomesauce!
Posted by Steven at 10:47 PM 1 comment: