This blog is now officially one year old! 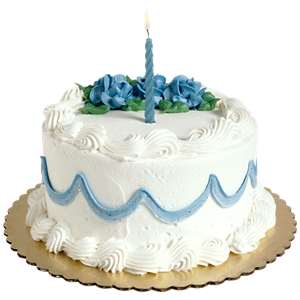 I wanted a place where I could post some art of mine and talk some about the events I've been going to and maybe comment some about stuff I like!  I've managed 63 posts of some nature (that's more than one a week!) and gotten some very nice feedback.  Also, I like looking at the site stats and seeing all the views from all over the world!  We live in an amazingly connected world today. According to said stats, my blog has been viewed more than 9,400 times! I guess I'm closing in on a "milestone"!

I'll close by saying I'm happy with my blog here and I intend to keep posting!  In fact, I have an idea for something in a day or two...
Posted by Steven at 9:18 PM 1 comment:

The Federation of Extra-normal Defenders, commonly referred to by the acronym F.E.D.s, is a loose organization of extra-normal heroes formed in the mid-1980s when 1st Man and Oceanus, who normally work as a duo, teamed up with a third hero, Lizard Man.  Afterwards, the trio decided to keep in touch with one another in case the need arose that they would be needed as a group.  As time passed the addition of other heroes increased the ranks of the F.E.D.s. Various sub-groups within the team operated together as they were needed.  The largest group assembled was in 1988 and involved all 6 of the heroes that had ever been members of the group.  In the early 1990s individual issues dissolved the group.  Note that there never was an official beginning or ending date for the F.E.D.s.  The only former member of the F.E.D.s known to be active as of 2002 is Lizard Man.  The heroes who have served as members of the F.E.D.s are listed below 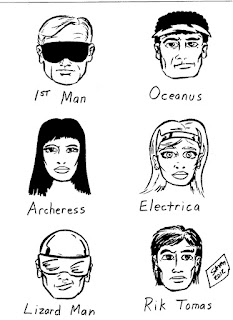 1st Man- powers: can morph and stretch his body, gaining heightened strength as he does so.  Current whereabouts: 1st Man disappeared on a mission in 1993.


Oceanus- powers: the ability to breathe and operate under water and out of water, super human strength. Current whereabouts: Oceanus disappeared on a mission in 1993


Lizard Man- powers: the lower half of his body is reptilian, and he has a reptilian tail, both of which have super-human strength. Current whereabouts: Active in Atlanta


Rik Tomas- powers: Rik is an inventor who created many weapons and devices he used to fight crime. Current whereabouts: retired after losing a leg in battle 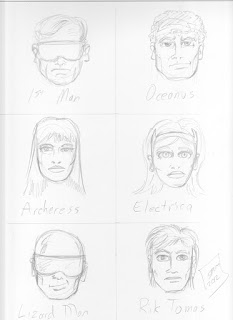 Posted by Steven at 3:52 PM No comments:

Bob Corby is the creator and organizer of the Small Press and Alternative Comics Exposition (SPACE Con).  He is also an accomplished writer and artist of small press comics himself.  If you haven’t read Bob’s Bunny Blues comics, you should.  If you’ve ever been to SPACE or exhibited there and haven’t read Bob’s stuff you REALLY REALLY need to!!  Today I’m going to review Bob’s Bunny Blues: Leaves series because I recently reread it and I think it’s about time I write a lengthy review of his work!

Mike Blues is a rabbit, thus the title of the book.  The characters in this comic are all anthropomorphic animals.  Though this isn’t really a funny animal book.  It is funny, don’t get me wrong, but it isn’t funny like Disney or Spongebob or some such. It’s funny because Mike is such a loser.  Mike is a Private Investigator with no money, no work, and no ability to tell the woman he loves, Kit Jones, that he’s crazy about her. By the ay, Kit is a cat.  Pretty cool, huh? Mike is such a loser that he’s easy to feel sorry for.  He’s one of those “sympathetic characters” I recently was blogging about (check the recent archives, you’ll see what I mean).  In fact, he’s such a loser he might even be more of a “pathetic character”.  Either way, he’s very entertaining to watch.


The main plot of the series is Mike taking a job helping Kit travel across country looking for places to sing as she reconnects with her musical roots.  While doing so Mike desperately wants to connect with Kit, but things always go wrong somehow.  To help him along the way, Mike has his friend Marcel (a penguin) who is Kit’s manager, but he’s not much help.  For real sage advice Mike turns to a dust bunny named D.B., who may or may not be real.  (If talking animals are real, can dust bunnies also be real?)  D.B. (wonder what that stands for?) mostly tries to convince Mike to talk more to Kit.

My favorite little bits in the story are when Mike runs off the road and walks to the nearest gas station with Kit and when they meet an old nemesis of Mike’s who hits on Kit pretty strongly.  There’s some excellent artwork, in particular the scenic views during the road trip, and some extra including short stories and artwork by some other small press artists.


Bunny Blues: Leaves can be purchased at Bob’s website: http://backporchcomics.com/ along with a bunch of other comics of Bob’s such as Vugs and OH, Comics! 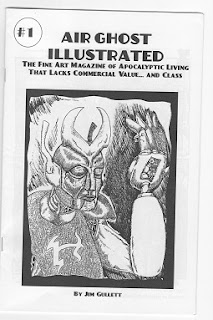 I have one more comic to review this week: Air Ghost Illustrated by Jim Gullett.  Air Ghost Illustrated continues the story of Ziff begun in Candy or Medicine #16.  In this chapter, a Lizard named Komodo who is mad at Ziff because Ziff killed their mutual employer captures Ziff. Ziff uses his brains to get the best of Komodo…maybe.  The art is in Jim’s style of using lots of lines and textures.  The pictures are clear, however, and the action easy to follow.  It’s a neat rendering style, except I’d like technology (in this case, guns) to be a bit more defined.  There are also some sketches and a short backup feature called Gilai.  Jim can be found at his blog: http://jimgullett.blogspot.com/


That’s it for today, though I would like to remind readers about my webcomic, Mutant Elf, which will soon reach the conclusion of the first story arc!
Posted by Steven at 10:49 PM 1 comment:

I’m still reeling from the news that comic’s legend Joe Kubert has passed away.  I had something else I was going to write today, but I just keep thinking of Kubert.  I’m not sure what to say except he was a great artist, a creator, and a teacher who started the school of cartooning that bears his name.  He’s probably one of the top four comics artists of all time.  I discovered his work late because I was such a Marvel-centric fan in my youth and Kubert did most of his work for DC.  But I don’t think I’ve ever seen a bad drawing he did.  I’ll end this post with some examples, and encourage readers to search for more on your own.  Then buy something he did!  You won’t regret it!! 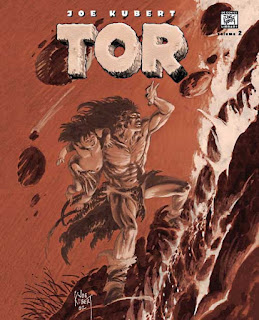 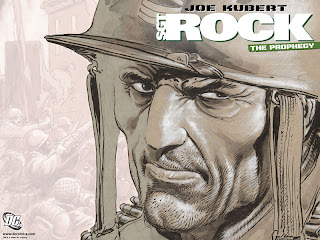 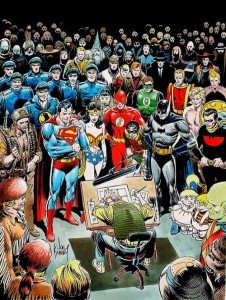 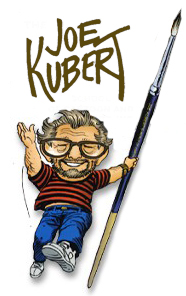 Aliens among us! (Reviews of the Resident Alien comic and Homegrown Alien webcomic

This post is my review of Dark Horse Comics’ Resident Alien mini-series and the Homegrown Alien web comic.

Resident Alien began as a series in the anthology title Dark Horse Presents.  The three segments in Dark Horse Presents were reprinted as Resident Alien #0, and the story continued in Resident Alien #1-3, completing the first miniseries.  I just loved the story and art in this series!  First, let me discuss what the story is about.  An alien crash landed on Earth 3 years ago and has since been hiding out among us.  He has some mental powers that allow him to mask his appearance to most humans, and he’s living life in a small town as a semi-retired doctor named Harry Vanderspeigle.  He ends up getting involved in a local murder case, risking discovery to help people and also to satisfy his curiosity about the case.  This concept is sort of familiar to other aliens-among-us stories, but the alien’s empathic powers and detective work make for an excellent twist on the idea.  In fact, I’d say this is the most original sci-fi concept I’ve seen in years.  Writer Peter Hogan does a great job introducing the reader to a cast of characters who populate the town of Patience.  The dialogue and interactions between the characters are very realistic, and there are plenty of characters introduced that may be the murderer.  Also, there comes the chance that one of the residents has realized Harry is more than what he appears!  This comic had me anxiously turning pages to find out what would happen next! 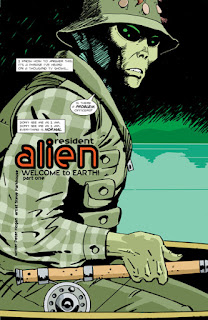 The art by Steve Parkhouse fits the story perfectly.  Steve has a realistic style with storytelling that is incredibly clear to the reader.  The situations and environments look great.  The characters each have a unique look without being cartoony.  In the comic, the reader always sees our alien protagonist in his alien form, thought he other characters see him as human, this storytelling mechanism is one of those things that is just perfect in comics and shows the strength of the format.


I cannot recommend Resident Alien enough.  I hope everyone reading this goes to a comic shop or http://www.darkhorse.com/Comics/19-669/Resident-Alien-0 and buys or orders a copy!  There will be more Resident Alien in upcoming Dark Horse Presents issues too.  I’m hoping there’s a trade paperback collection soon so my local shop can keep a copy on their shelf for recommendation!

The second alien comic I’d like to discuss today is Homegrown Alien by Joe Davidson, found on its own website.  I’ve done some reviews of individual stories of Homegrown Alien before, but I just finished reading all the strips on the website and I’d like to discuss them.  The paper comics deal with Max’s past travels with Old Max, while the webcomic has stories from a time period after Old Max has died.  Our Homegrown Alien has taken a job selling corndogs at an amusement park called Wonder World, where he and his co-worker Tom have to solve the mystery of the Phantom who is killing other employees.  Max’s interactions with human are very well handled.  He’s very unemotional and practical in the face of danger but helpful to those who are in need, also.  The art is well done, with clear storytelling, and is cute and cartoony.  Joe does a very nice effect going to black and white when the action goes underground also.  You can read the Homegrown Alien webcomic for free, so go take a look!  (Note: the story contains some adult language and violence.)


And you can also read my webcomic, Mutant Elf for free.  Please check it out, too! oH
Posted by Steven at 9:57 PM No comments:

Who's team are you on?

I think it’s time to post some Out With Dad fan art! 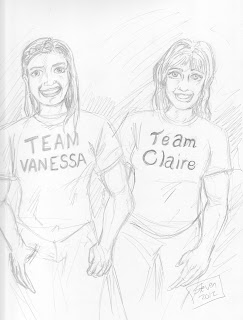 This pencil sketch is, of course, inspired by the dilemma Rose faces of who she really wants to be with, and the friendly debate between fans of the same issue. I’ve said before that I have no real preference.  I will say this: I think Jason maybe made Claire a little too strong a character.  After all she’s nice, cute, proud and confident.  What’s not to like?  Rose better get going or Claire will move on to someone else…
I have more ideas for more art, but I’m hoping some other fans will beat me to it and show some of their work before I get mine done!
Posted by Steven at 9:34 PM No comments: