I have been thinking lately about how I am ever going to complete the saga of the F.E.D.S, the comic series I named this blog after.  I began writing and drawing the FEDs in 1999! About 8 billion years ago. It is a series of mini-comics, that I photocopied and stapled together, as was the norm at the time. However, it doesn't seem prudent to continue it in such a format, as it won't been seen by many readers.

With Mutant Elf I have been able to post a weekly webcomic, that apparently reaches a decent sized audience. Though who knows how many views are really readers?

So, anyway, here's what I'm going to do: I'm going to alternate Mutant Elf and the FEDs on Comic Fury. I think this is the only way I'll ever get around to finishing the FEDs story. Which does have a definite ending. Then, when I get enough "chapters" done, I'll publish it in a trade paperback of some kind.

I will also be loading the original FEDs series on the Comic Fury site, hopefully a couple of pages a week. A refresher on what has happened so far!

Look for the FEDs in two weeks, and a new chapter of Mutant Elf starting the week after! 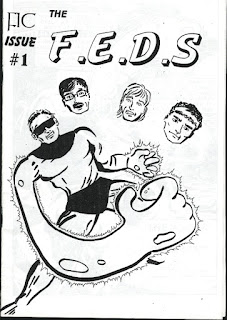 Posted by Steven at 8:35 PM No comments: