Review: The Brotherband Chronicles with a sketch 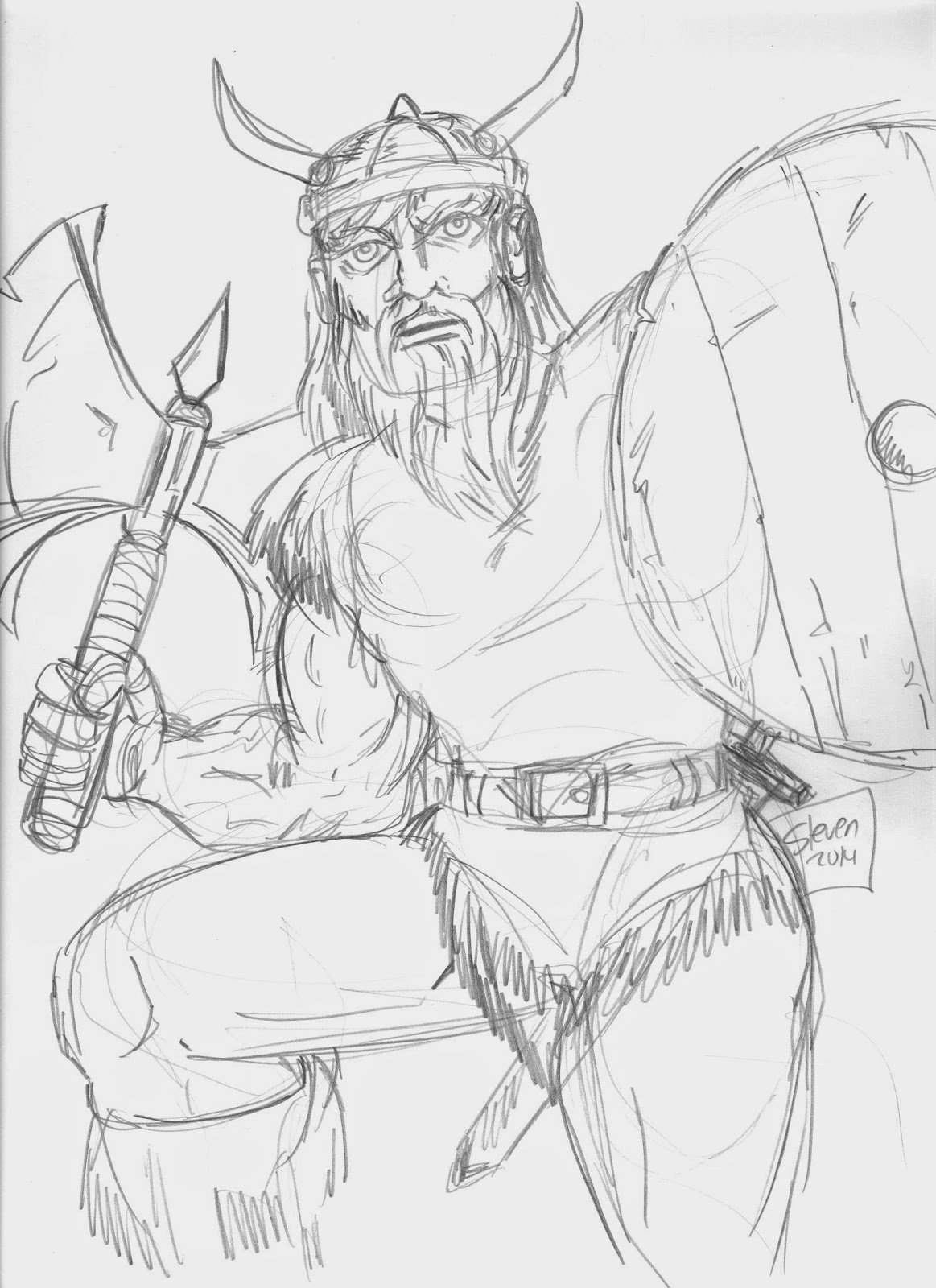 I’m working on a drawing of a Viking warrior, or at least the fantasy equivalent of a Viking.  My inspiration for drawing a Viking was my recent reading of the Brotherband Chronicles, a trilogy of young reader novels by John Flanagan that is also a companion set to the popular Ranger’s Apprentice series. I really enjoyed the Ranger’s Apprentice series, but I admit to being hesitant to reading about the Skandians, Flanagan’s equivalent of the Vikings of lore.  The Brotherband is a group of young warriors who all have a quality that makes them atypical of the common young Viking.  Led by Hal, an amazing inventor who is an outcast because he is only half-Skandian, the group has amazing adventures that are fun to read.  I still like the main series better, but this is a nice spin-off and I hope there’s more of the Brotherband in the future. 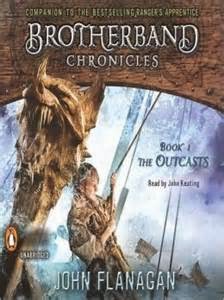 As I said above, I am working on the Viking drawing. It’s still just pencil, and it has a long way to go.  But I’m having fun with it, and I’ll post another scan here when it’s done!
Posted by Steven at 11:29 PM No comments:

The Black Widow has grown in popularity, at least among non-comic book readers, due to appearing in three of the recent Marvel movies, portrayed by Scarlet Johansson. It’s strange because there are plenty of other female Marvel heroes that are much more popular than the Widow.  The Black Widow from the comics has always been a nice character, though her origin is very tied to the Cold War.  She debuted as an Iron Man villain, eventually became a hero, a spy, a member of the now defunct Champions and leader of the Avengers! She has been romantically linked with Hawkeye, Daredevil, and even Bucky. 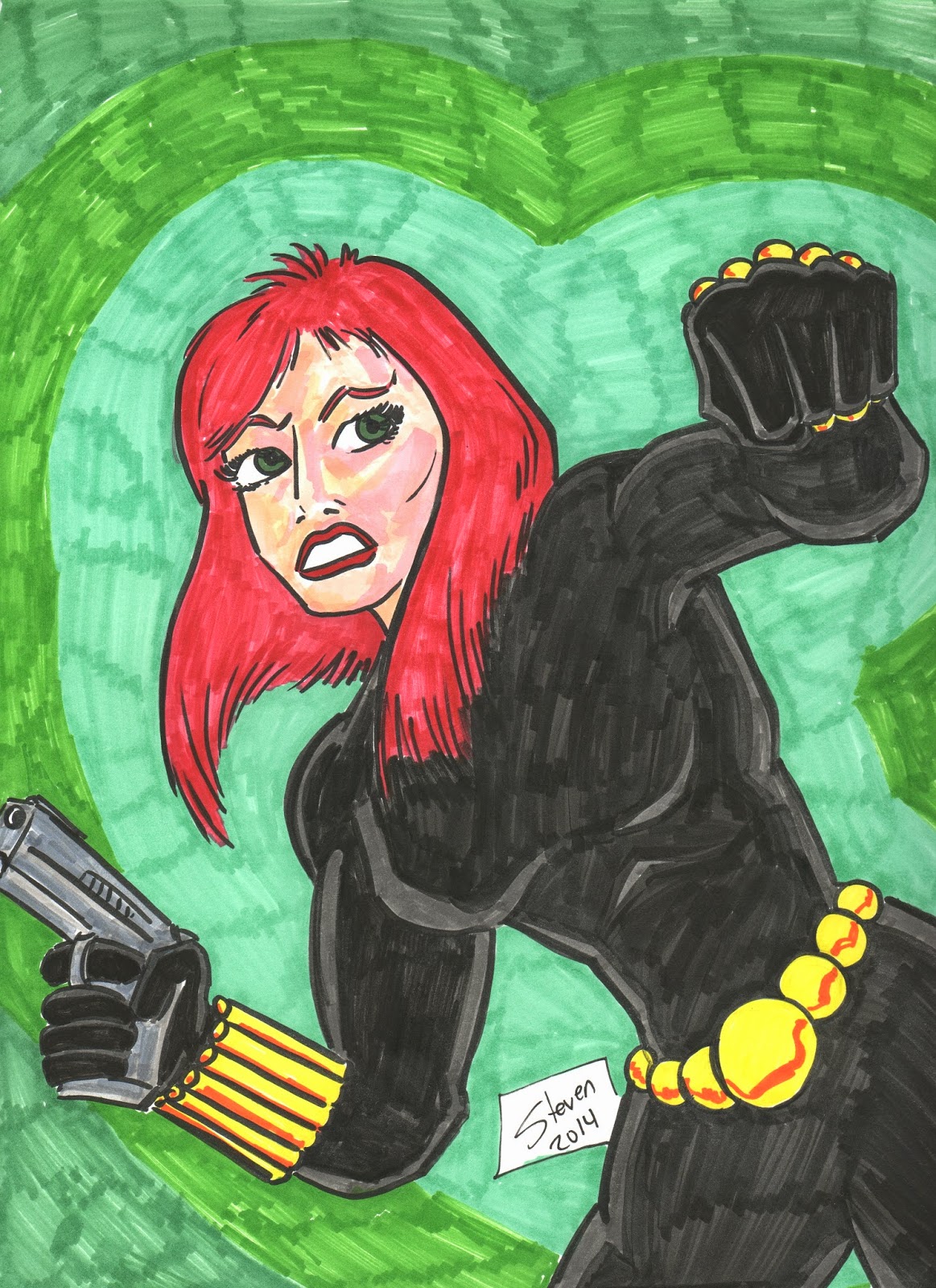 I like her black spy-suit look the best, and I prefer her other gadgets, such as her “widow’s bite” over a gun.  Overall, I’d say Natalia Romanov, the Black Widow, is one of Marvel’s best non-powered heroes!
Posted by Steven at 10:20 PM No comments: 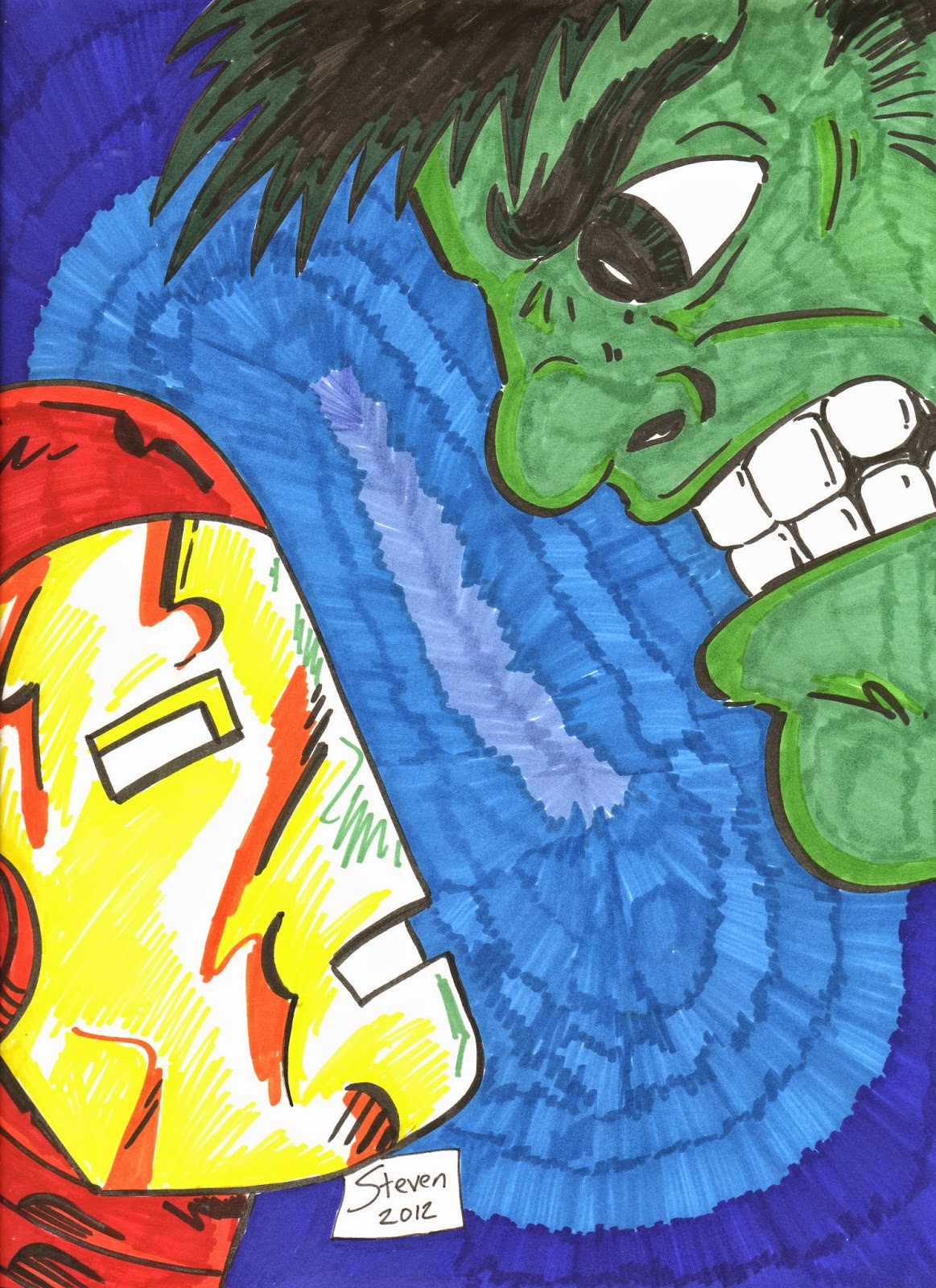 One of the things I found most surprising about the first issue of the Avengers when I read it as part of the “Son of Origins” collection was the role of the Hulk.  In the preview, Stan Lee speaks of using Loki as a villain that could face a group of heroes.  But, in the story itself, Thor takes on Loki by himself while the rest of the team (Iron Man, Ant-Man, and the Wasp) fight…the Hulk!  Due to Loki’s trickery, everyone was, in fact, summoned to face the Hulk.  In the end, everyone is friends and the big green guy joins the group.  But just to show how little Bruce Banner’s alter ego fit in the team concept, he left at the end of issue two.  In issue four, he was replaced by Captain America, who tried to convince the Jade Giant to rejoin later in the teens or thereabouts. Therefore, despite being a founding member, the hulk has never hung around with the Avengers for long.


Which is why I drew this picture.  I think it shows the relationship between heroes such as Iron Man and the purple-pants wearing behemoth. You can’t be sure if Hulk will help you or smash you.  I guess you take the chance, because you definitely don’t want him fighting for the other side.
Posted by Steven at 10:21 PM No comments:

I realize I haven’t posted anything on my blog here lately, so to make up for it today I thought I’d post some recent art I’ve been working on and comment on the characters or something. Maybe one new pic every day or two. 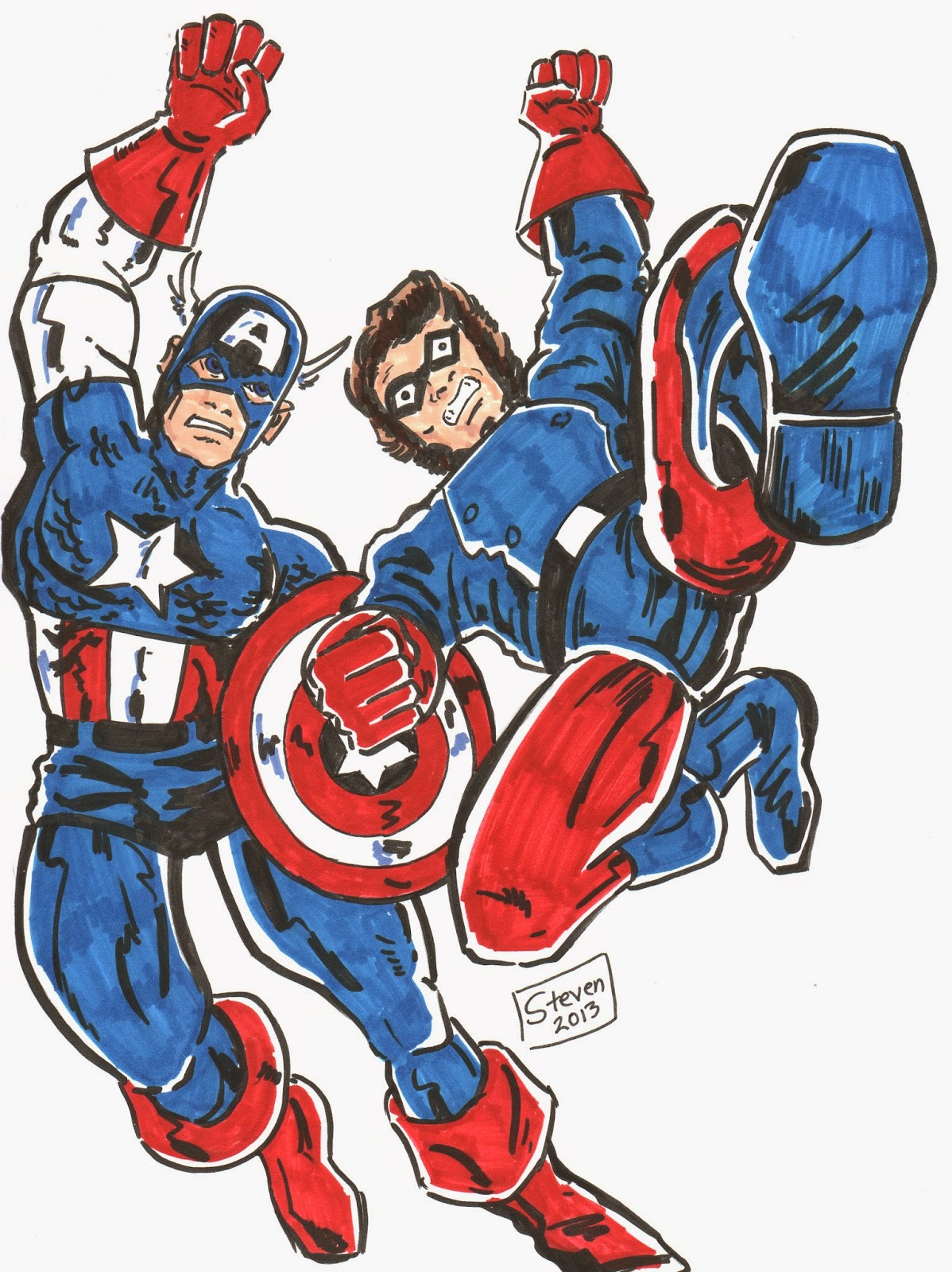 First up we have Captain America and his first sidekick, Bucky.  Bucky is a strange character to me.  Cap was created in a time when most adult heroes had teen sidekicks, and Joe Simon and Jack Kirby followed suit with Captain America, giving him a young protégé called Bucky.  Bucky was really Bucky Barnes, the company (Cap was in the army) mascot, who had inadvertently discovered Steve Rogers was really Captain America, and that led to him being trained to be Cap’s junior partner.  The funny thing is, while Cap had the Super Soldier Serum and an indestructible shield, Bucky just had a cool costume and a domino mask.  He really didn’t do much more than get captured, as shown on most of the early covers of Captain America Comics.  When Stan Lee brought Cap into the ’60 via suspended animation to join with the newly created Avengers, he revealed that Bucky had died during he and Cap’s last mission.


I think removing Bucky from the team was a good move, as him being alive didn’t add anything to Cap, but his death haunted Steve Rogers for years.  Bucky was mostly unknown when people like me started reading Avengers and Captain America comics in the ‘70s and ‘80s, and Captain America was one of Marvel’s greatest.  Still, I loved the rendition of Bucky and the old heroes in Roy Thomas’ Invaders comics in the’70s. Later, Bucky would return in a storyline that fans seemed to enjoy, but I still haven’t read.
Posted by Steven at 9:44 PM No comments:

1989 was a very interesting year for me.  I spent most of the year in Long Beach, California working for the United States Navy.  I was discharged in August and then started my first year of college.  But the amazing thing about that year was the way Batmania has swept the nation.  It was amazing.  There were Batman things everywhere.  Shirts, hats, shoes, posters, toys, games, you name it.  In fact, my Navy buddies (Hi Carl, Tony, Rick and Mike!) and I made a game out of it.  We noticed so many people wearing batman paraphernalia when we were at amusement parks in California that we decided to count how many people there were showing their Bat-fandom.  I forget our exact count now, but let’s just say it was more than I’ve ever seen of a group of unrelated people wearing the same theme clothing outside of military uniforms!

The Batmania was in anticipation of the upcoming Batman movie, and continued well after the movie premiered.  It brought a lot of nice attention to comics about Batman and other characters, and I think had a lot to do with the increase in comic sales later in the 1990s.  It was nice to finally get some media attention for comic writers and artists as real writers and artists, not silly creators of kids’ stuff. In fact, I remember having a conversation outside of the movie theater with a guy who worked for the Entertainment Tonight TV show about the changing demographics of comic book readers.

By the way: the actual Batman movie?  Yuck!  I was so terribly disappointed. It’s hard to give a full review, since I’ve tried very hard to forget about it in the intervening years, but I can give some lowlights:  They wrecked the Batman costume, which started a trend of movies ignoring what comic book costumes look like originally.  Michael Keaton was a horrible pick as Batman, and looked like a total fool as Bruce Wayne.  The actions scenes were weak, and Batman never showed any ability to actually fight.  Finally, the movie can’t decide if it’s a period piece, taking place in the 40’s era as half the costumes/vehicles appear, or a modern story.  There are several sequels to this movie that are all worse than the original.  It would be soon after seeing Batman that I figured out I don’t like any movies director Tim Burton ever does.


Eventually, Batman would return to cinema in the excellent Batman Begins and its two sequels (I like the third installment best). Those are good movies to see.  I highly recommend those!
Posted by Steven at 2:51 PM No comments: