Review: SPACE and what's next!

I’m so slow to post things on my blog lately!  I was recently at the SPACE convention in Columbus and for the past week I’ve been busy creating things for my next show, Fun Across the Galaxy, plus I’ve been reading a lot. 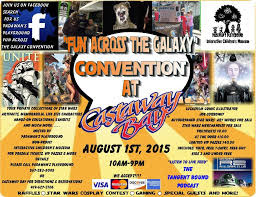 You see, SPACE is a wonderful small press/Independent comic’s show, so I got to talk to a lot of creators making all kinds of wonderful and original comics!  I bought and traded for a bunch of new stuff, and I was so excited by the experience I’ve been reading and creating every chance I can get!  I need to start writing about the books I’ve read and the creators involved.  I also have some other things to write about, and some new art of mine I’d like to share here.  I just need to get around to posting stuff.

Anyway, I can’t say enough of how fun SPACE is and how friendly everyone there always is.  The show was hampered this year by the original location closing, but organizer Bob Corby did a great job getting a wonderful new place.  The new location is the best the show has ever had, and next year SPACE will return to being a Spring show.  I’m ready to send my application for a table right now!
Posted by Steven at 10:47 PM No comments:

Review: Reconnecting with Alicia (Out With Dad 4.02)

Now it is time for me to talk about the most recent episodes of Out With Dad, the world’s greatest webseries.  Episode 4.02, “Reconnecting with Alicia” is one big shot of Rose and Alicia walking together and talking.  That may not sound exciting, but considering they are talking about some exciting stuff!  In this episode we get to find out some important information about what has happened since last season, and where we go from here.  Let’s look at some of the conversation: 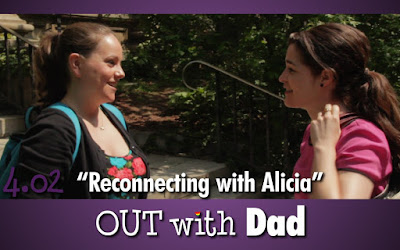 Alicia tries to comfort Rose about entering university.  I think this is the first time I’ve realized Alicia is older than Rose.  Though I guess it was hinted at before.  If I’m remembering Rose once commented about “since we (Rose and Kenny) were in grade 9” to Alicia.  Anyway, it helps that Alicia has some experience at university and that will help the viewer understand what they are doing during the series, I think.

Alicia also notes Rose in still introverted, and they both show their intelligence by knowing the textbook definition of “Introvert”.  Alicia also mentions that they weren’t allowed to have a GSA (Gay-Straight Alliance) in High School, but there is one in university.  But Rose isn’t over-eager about advertising her sexuality to everyone at her new place of learning.  Rose does agree to go to a GSA meeting though.

We now learn a bit about some absent members of last season’s cast.  Claire keeps in touch with Alicia, but Rose hasn’t spoken to her since “the birthday incident”.  And something happened between Rose and Vanessa, but Rose isn’t saying anything right now.  I think it almost unbelievable that Rose and Claire never spoke again in High School, but I think fans will like it better if they eventually get to see some kind of reunion rather than just hear about it.

There’s a very interesting exchange concerning dating. Rose doesn’t even want to date because it makes it obvious she’s a lesbian, while Alicia has it easy since everyone expects a girl to have a boyfriend.  Especially for Rose, who doesn’t like to be the center of attention.  I think Rose does have a point here, as I do think, in today’s society, a gay couple is going to stand out more than a straight couple.  But Rose will, eventually, have to get past not wanting to stand out, or she’s going to have to get very comfortable being single.

And I think that about covers it for episode 4.02!  This keeps me one episode behind in my reviews still.  Maybe I can catch up after the SPACE convention this weekend. (Where I will have Out With Dad-related art available if anyone wants to come see me in Columbus!)  Boy it’s fun to be watching some new Out With Dad!
Posted by Steven at 10:52 PM No comments:

The Small Press and Alternative Comics Exposition approaches later this month.  SPACE is a wonderful convention that showcases comics and creations that are not by the mainstream creators and mainstream creations.  Rather, it’s a bunch of people putting forth their best efforts to express themselves and entertain a bit.  OH, Comics is an annual anthology (mostly..it skipped a few years) I have contributed to since its 10th issue.  It is available at the convention and can be ordered online from publisher Bob Corby directly. (Or you can buy a copy from me if you see me at a different show.)  The latest issue of OH, Comics was officially released earlier this year at the Extra SPACE con, but I haven’t gotten around to talking about it until now.  So here’s my review:

Bianca Alu-Marr and Steve Peters start out this year’s “Music” theme with a sci-fi tale called “The Song Remains the Same”. The story involves a little musical mystery on a space station that perplexes a human and a dragon.  I like the slick presentation and the clear art and lettering.  It’s a solid beginning to the anthology and a nice intro to The Comicverse characters and setting.

Next Craig Bogart takes us on the road with Bon Jovi as he confronts the devil.  Craig’s story has a neat twist and makes some commentary about rock and roll music and how it has changed over the years.  A very solid self-contained tale here that I’m sure many will find humorous.

Pam Bliss presents us with “Always Do Your Best”- the theme song for the hero Foursquare.  Though it’s hard (for me) to sing the lyrics instead of just read them, the song is quite well written, and campy as a hero’s theme should be.  Foursquare’s reaction at the end is well done also.

Of Song Sung & Unsung is a sad poem by Matt Levin with rubber stamp art accompanying it.  The poem is well written and I’m enough of a musician to understand the feelings expressed, though I’m no composer.

Mr. Rifft by Bob Corby is a musical ghost story with a nice surprise ending and very nice art that is of a unique look among the entries this year.  It really stands out visually and the storytelling is great as usual for Bob. 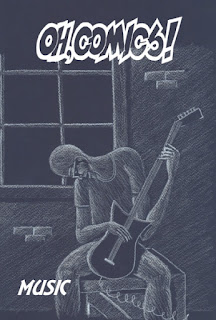 Robot Rap Battle by Jared Wenzel & Eric McAlister tells of two robots rapping.  The raps are well written and the art may be rough, but it fits the content of the story well.  The reaction shots of the other robots (and a microwave) are very good!  This is a fun strip.

Out of Tune by Me is a sequel of sorts to the story I did in the first Music-themed anthology many years ago (which I still have a copy of for sale!).  It involves the same villain, Force of Mind, and one of the heroes, Lizard Man.  I like using the First Lady so I figured out a way to fit her into the story.  Hopefully the ending makes sense to everyone.

In M.A.G.I.C. by Michael Anthony Carroll Michael puts together another team of stick-figure super heroes. He seems to be able to create at will teams of heroes with just about any theme and really clever names.  I don’t want to say more here, because it’s better to read it yourself!

Kel Crum does a one-page gag called Everything Sucks which has a much happier ending than you’d suppose.  And it’s a good example of how he comes up with punchlines that are extremely unexpected.

Troppo by Ben Small is a science fiction tale of a fighter pilot who listens to music while fighting.


The intricate art is a little difficult to see in the anthology but the story is easy to follow.

And finally we have Troy Verasis, Tanmoy Das & Nick Schley tell the story of Santa’s Band.
Which is about just what it sounds like—Santa Claus starting a band.  With a clever name, too!

You can click the links above to find out more about the individual creators.  If you see your name
without a link, please send me one and I’ll add it.

That’s it for my review of OH, Comics.  Hope to see lots of people at SPACE this year!
Posted by Steven at 11:18 PM No comments: