Groo vs. Conan is, simply put, the best comic I’ve read all year!  I just have to write a bit about the characters, creators, and how much I enjoyed the series. If you know of them and this series, it will be a lot of stuff you know, but please be patient.  I am writing this in the hopes that someone out there who never has before might just give Groo a chance! 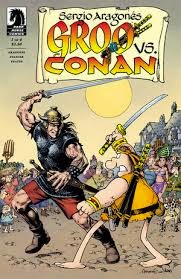 Sergio Arangones is probably the best funny-style cartoonist ever!  He’s been doing doodles and cartoons for Mad magazine for decades and he just seems to fit more in a page that is physically possible.

Mark Evanier write Groo and is also known for writing a bunch of Garfield cartoons (My wife is a huge fan and we own them all on DVD).

Somehow Mark and Sergio got together and created Groo the Wanderer, the funniest barbarian ever! Groo is also the best.  At what he does best, that is.  By which I mean kill people and act without intelligence. He also likes cheese dip. I don’t know why I’m mentioning that now except it’s funny.
Thomas Yeates is a great artist who draws some very serious Conan comics.  This somehow makes him perfect to bring Conan into the world of Groo.  Seriously.  This guy is very good!

Conan the Barbarian, if you don’t know, is the creation of Robert E. Howard and was first published, in prose not comic form, in the 1930s.  There have been many adaptations including movies and TV series, as well as the current Dark Horse comics and a long run of comics at Marvel.  Conan is big and strong and clever, and has defeated many a foe.  Not a foe as dumb as Groo though.  Of course, no one is as dumb as Groo. So Conan is facing his greatest opponent: A killing machine with no brain. Sounds like fun! 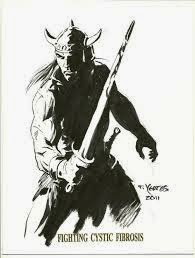 Groo vs Conan mixes the grim and gritty world of Conan with the strange and whimsical world of Groo in a fashion that reminds me of the old Disney movies when they would combine (2-D) animation and live action footage. But the story really revolves around events that occur in the real world.  Or at least, the real world as depicted by Sergio.  The whole crossover results because of Mark and Sergio trying to save a comic-book shop that is going to be leveled to make way for a shopping center.  This somehow leads to Sergio being injured, and getting lots of strange medication that make him feverishly imagine that he is Conan and is on a quest that involves Groo. It doesn’t sound funny at all when I type it, but it’s extremely hilarious when you read it! Really!! 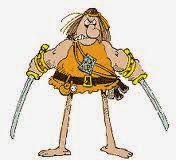 On the Groo side of the tale,   the wanderer is hired to destroy a bakery loved by the locals to make way for a castle. Conan is tasked with stopping the simple-minded one from wreaking havoc.  And the local villagers hilariously observe, comment, and get all messed up in the whole thing! Of course, we get to see the inevitable showdown between swordsmen.  The battle of the century!  The war to end all wars! (Wait, that was WWI…) Anyway, I just can’t describe it without totally spoiling the whole thing. So I suggest you go buy it. I bet you can still order the individual comics, which are cool because they include letters pages. Or I guess there’ll be a collection soon.  But I wouldn’t wait if I were you!

You need to read this series now before the next Groo series starts.  After all, you don’t want to have the next death spoiled before you read it!  And with Groo around, there are a lot of deaths!!
Posted by Steven at 10:33 PM No comments:

Now is the time to discuss episode 3.19 of Out With Dad, “Vanessa Meets Sera”.  This episode continues the spin-off series Vanessa’s story with a rather different setting as Vanessa discusses her life and current predicament with her brother’s friend Sera.  There two non-story related things in this episode that are interesting.  First, this episode is the first cross-over of Out With Dad, as the character of Sera is the star of another Toronto webseries called “LESlieVILLE”.  Also, this episode was filmed in an interesting location, a solarium overlooking a Toronto street.  This caused some technical difficulties, but the final product looks very nice.

As for the story, this episode is almost entirely a conversation between the two characters.  Sera has come to give Vanessa some perspective about accepting herself.  It is, as Vanessa asks, a conversation about “gay things”, but it is also about labels and belonging to a group. 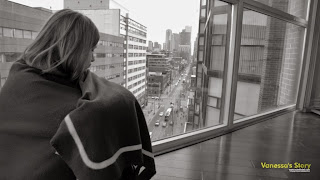 Sera begins with a story about High School, Xena, and labels.  When Sera found an online group of lesbian fans of Xena, she found comfort in knowing there were other people like her, and they all fell under the “lesbian” label.  This is an interesting perspective, because knowing there are people who are like you provides you with people you can identify with. The problem Vanessa has with this is that she doesn’t really see herself as belonging to a group, or having a label.  Vanessa’s attraction to Rose has not become an attraction to girls as opposed to boys.  But Vanessa does seem most likely to think of herself as bisexual. Despite her insistence that there’s only been one girl, she was at least somewhat interested in the girl at the flop house.

Sera seems to convince Vanessa that loving someone doesn’t have to depend of gender, and that Vanessa’s parents really do care about her, they just can’t accept her being anything but heterosexual. I think we’re seeing Vanessa finally get some of the support she needs to deal with things in her life.  There are far too many situations that end tragically because people are kept from the support they need. And having someone, especially a close friend, can help you get through almost anything.
Posted by Steven at 11:23 PM No comments:

And now we pick up where we left off reviewing the final block of episodes of the award-winning and totally terrific webseries, Out With Dad!  My last review covered Out with PFLAG, part III, so now it’s time to take a look at episode3.18, Out with PFLAG, part IV. The story picks up with a conversation between Rose, Nathan, Claire’s Mother, and Robin (the PFLAG sharing leader).  In this conversation, Rose and her dad finally open up and come clean about everything that’s been happening at school with the changing room, Brittany, and the gym teacher.  Rose is finally convinced that she cannot keep quiet and she must tell all about the situation to the principal.  The most interesting thing about this conversation, to me, is Rose’s statement that she is herself in the wrong.  It implies that she still feels guilt about being a christian and being homosexual. 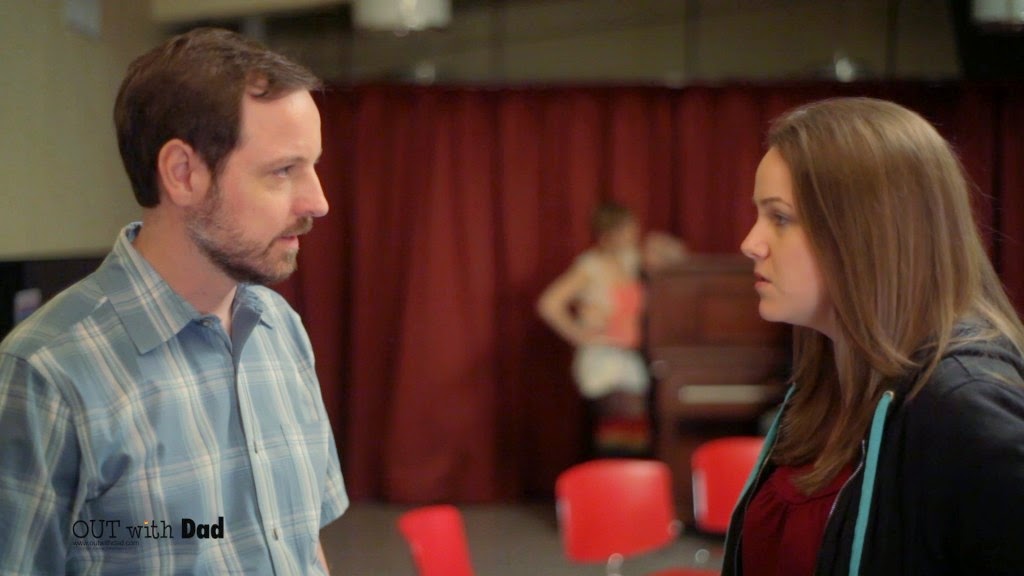 The next segment has Claire, Alicia, and Nomee discussing starting a Gay/Straight Alliance at their school.  The conversation includes facts about GSAs and how some religious schools do not allow them.  Fortunately, Alicia steps up and shows her willingness to begin an organization no matter what, and Claire is thrilled to have Alicia as an ally.

The episode ends with an emotional conversation between Rose and Nathan.  They talk of what’s been happening at school, and not keeping secrets from each other.  It’s great to see Rose realizing that despite her wanting to stay away from the spotlight, she has to stick up for herself.  And she has to tell people when something bad, especially something physically harmful, happens to her.  The conversation gets a little lighter as they discuss Rose’s upcoming birthday.  But it ends on a dark note as Rose realizes Vanessa will be absent at her party this year.

Or will she?  We’ll check in on Vanessa next time, and maybe get a hint.
Posted by Steven at 10:37 PM No comments: