It's time for another one of those posts where I discuss a small-press comic I picked up at the SPACE convention earlier this year in Columbus. Or in this case, two comics:

Murray and Bo by Michael Carroll is an "8 hour and 4 minute comic", which means it was totally written and drawn in 8 hours and 4 minutes. And it isn't short, either. It comes in at 24 pages of story! So then you must think "it's just scratchy art and no story". Well...Michael's art style isn't overly complex, it is true. BUT...the art does an excellent job telling the story and the story itself is extremely clever and entertaining. I'd say you can't get a better entertainment per minute of creation ratio anywhere! 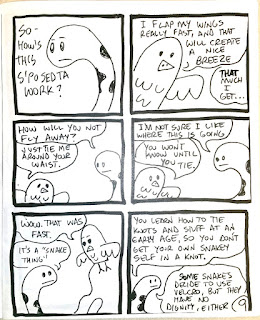 Specifically, the story is about a bird that works as an air conditioner and the snake that hires him. That sounds rather weird. And it is. But...it gets weirder. It seems the snake didn't know about tying off to an anvil. I'd think this would be obvious, but somehow he missed this step. So instead of staying home, Bo (that's the snake) goes on an adventurous flight with Murray (that's the bird, of course). All hilarity ensues. And I'm not kidding. This is a very funny book. Just one of those stories that works perfectly though if you pitched the idea no one would believe it would work. But trust me, it does! So get a copy today!

Blink: And Now, This... is, by contrast a very serious comic about a very serious subject. Author and artist Max Ink takes his popular characters from his Blink comic (search my history and you'll find I've discussed them before) and uses them to tackle the issue of racism. This comic takes place shortly after the murders of nine people in a black church in South Carolina. Blink, Hank, and Sam react to the shootings with different levels of  anger, despair, and hope. Of course, the comic can only scratch the surface of the horrible problem of racism that still rears its head even in our modern, advanced world. But it is still a worthwhile discussion, and the comic should make anybody think about this world in which we live, how we treat each other, and how we can make it better.

Rather than discuss the specific conversations in the comic, I'd like to continue the discussion with my own thoughts. I know this world, and the country in which I live, are not perfect. There are a lot of people out there who seem to find any reason: race, religion, nationality, sexual orientation, etc. to hate each other. However, I do believe the world is a better place to live today than ever before. We have broken down barriers and at least tried to destroy legal discrimination. I am always reminded that my mother went to school in a segregated system in Alabama, and just a couple generations later such a practice is unfathomable by most students. So we should remember the past and how far we've come, yet not excuse the past but understand it. Then we should strive to make our present better so that in the future out progeny will look back and see how far we've come since our time.

Final thought: when I decided to combine these two reviews, I thought the contrast between the comics was interesting, and I wanted to do them together so as not to put off writing. However, though I love and recommend them both, I'm not sure they belong together. So I'm sorry if this offends anyone or seems inappropriate. Comics can be light entertainment or they can make you think about important topics. It's what makes the medium, especially as it pertains to self-published comics, so amazing to me!
Posted by Steven at 10:19 PM No comments:

Though rare, I have posted some of my thoughts about music, and specifically live musical entertainment at my favorite amusement park, Cedar Point. I wanted to write a bit about a particular show from this season for some particular reasons.  Maybe some high-up people at the Point will read this and continue this type of show. Because there are some great reasons why Bandstand USA is an amazing example of musical live entertainment!

For those of you unfamiliar with the concept, amusement parks offer live song and dance shows, each with some sort of theme. Bandstand USA has a great theme, because it starts with some great music. The catchphrase used by the park is "AM radio hits". This show does not contain any current songs, but rather highlights from the early days of rock-n-roll. Hits made famous by acts such as The Temptations, Chuck Berry, and Chubby Checker. The music includes songs such as "Land of a Thousand Dances", "Ain't no Mountain High Enough", and "Soul Man". These are some of the songs that formed the very roots of what has become contemporary Pop music, and all current singers should look back on these songs with thanks and appreciation. Personally, I've always loved the "oldies", and still spend most of my time listening to music from acts that began recording before I was born.  As I often say, music didn't begin in the year 2000. I applaud Cedar Point for having a show focused on this era. I don't know much about modern music, but EVERYONE should recognize most of these songs. And if you don't recognize some of the more obscure tunes...it's great to research them. I'll admit there were a couple I wasn't familiar with myself. 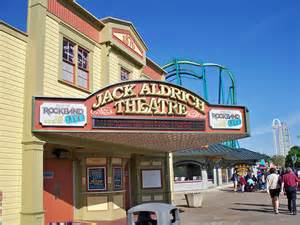 Also, I have to add that it isn't just the song selection that makes this show worth seeing, it is also the cast. I've seen plenty of shows like this overt he years, and sometimes there just seems to be a group of performers that gel really well. This seems to be the case here. The interaction and entertainment ability of the cast is superb. There are certain songs and dances that let individual cast members shine, but I can't really say there's a single performer who outshines the rest. The whole is great because of the contributions of the parts. (Well, I may have a personal favorite or two, but that's just my opinion and I would never say because I would feel like I'm putting the rest down.) I'm only superficially aware of the audition process, but the folks on charge do very well when picking out performers. Finally, one of the neat things about seeing this show many times over the summer is picking up on things that happen that you wouldn't notice if you were only watching it once. I notice the action in the background, how well the performers cover for each other, the funny looks, and little changes. And I really like seeing the dancer/singers waving to little kids in the front row. After all, you never know when you may inspire someone to be a future live performer!

So, as the season winds down, good luck to everyone involved, and to the Cedar-Point-powers-that-be: keep doing shows like this!

Usually I try to keep my page very all-ages, but I thought it best to warn that this review does cover an adult subject. I do not intend to have anything within this post be graphic or include profanity, but the subject is...well...sex. And that is definitely an adult topic. In fact, the comic itself has a warning "Not for kids--what's wrong with you!!"

Bad Sex is a SPACE award-winning minicomic I picked up at the SPACE convention earlier this year. It is written by Lauren McCallister and tells some stories about bad sexual encounters. It is allegedly nonfiction. I say allegedly not because I believe Lauren is lying about these stories, but because they are so sad that I hope they are embellished at least a bit. Y'know, for dramatic purposes. And that they really weren't that bad in real life, though I also have the thought that why would anyone make that stuff up? 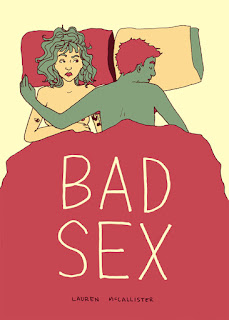 But more importantly, these are entertaining stories that are mostly funny, at least to me, with the exception of the one that makes me cringe. I'll not go into any details here. However, I can tell why this was an award-winning comic. It is very well put together and the storytelling is super. I also applaud Lauren for being willing to tell these stories. It's not a subject I would ever touch! Yet she pulls it off with grace and style. So, if you are an adult, you should get over to her website and get ahold of this comic!
Posted by Steven at 12:05 AM No comments:

I know this isn't a new movie, but I just got a chance to watch it, so I'm posting my review.

Love and Mercy is a biographical film about Brian Wilson, one of the founders of the Beach Boys, writer of the majority of their songs, and someone who is usually considered one of the greatest musical creators of rock and roll, if not all time.  I'll admit I'm a bit biased, as the Beach Boys are my all-time favorite band. And I don't just love the songs penned by Brian. For example, my favorite Beach Boys album is Holland, which includes contributions by all the guys that were members of the band at the time.

But this isn't a review of the band, it's the review of a movie, so on with it! 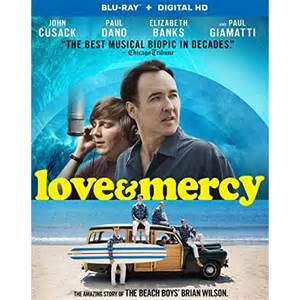 Love and Mercy includes some scenes that introduce the Beach Boys and set up the circumstances that caused Brian to be a composer of album material while the rest of the band toured. There isn't a lot of time spent on this, but that's okay, it on;y needs to be known for those who wouldn't know already. The bulk of the film is about Brian in two eras: 1)The creation of Pet Sounds and beginning of Smile and 2) Meeting his current wife, Melinda, and his escape from his Psychiatrist Dr. Landy.

The movie is a heart-wrenching look at the life of a guy who's a musical genius and more than a little mentally unstable.  Brian was always on edge due to his tough upbringing and difficult relationship with his father. His drug use and addiction took him over the edge. We can only dream of what Brian could have created if he had done a better job defeating his demons at an earlier time in his life. But at least Brian did eventually recover, and get good care to allow him to lead a normal life. Well, as normal as a rock legend can get, I guess.

The actors John Cusack and Paul Dano portray Brian at the different parts of his life, They don't look like Brian, but ignore that and enjoy the show, because they do a great job acting like Brian. The movie gets high marks from me for choosing very poignant scenes from Brian's life, keeping the story moving, and not messing with reality too often to be distracting.


Anyone who like music should see this film. And you kids who think music began in the year 2000 need to see this film to know the history of music. And then you should all go buy some Beach Boys records! I recommend Pet Sounds, Holland, Sunflower, and Summer Days (and Summer Nights!).