There are two types of people in the world" Those who think "Please Stand By' is a Star Trek movie, and those who are wrong.

Well, I've never even actually heard anyone debate Please Stand By. But I think I make my point. 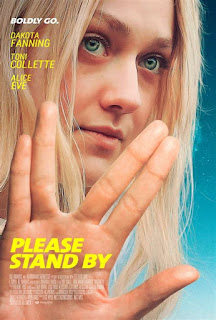 I wanted to talk about this movie because I think it makes such a great Star Trek movie, and because it hits the right notes concerning the lives of people who have autism. The film tells the story of Wendy (played by Dakota Fanning), a young woman with autism who lives in a group home. She has a job and a daily routine and is totally obsessed with Star Trek. The main focus of the movie is Wendy writing a screenplay for a Star Trek contest and delivering it on time to be considered for the judging.

But first let's talk about autism. I've been teaching over 20 years now, with many students on the spectrum. Most of my years were in Special Education, so I've had more training in the area than most people. The one thing I'll say about autism is that it's hard to define the characteristics of the condition. Every individual is, well, an individual, and there is no "typical" person with autism. However the depiction of Wendy in the movie is totally all hits in my opinion. Wendy's biggest challenge is socializing, including understanding other people's feelings and interacting with them. For example, she hates making eye contact with others, doesn't show interest in other's conversations (even when she is listening) and doesn't express her opinions very politely (she says "it sucks" a lot). But despite her limitations, Wendy does have people and things she cares about, and she definitely cares about one thing in particular. 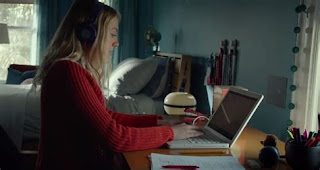 Wendy loves Star Trek. Personally, I'm not a huge Trek person, but I do have things I obsess over (Harry Potter, Greek Mythology, Ms. Marvel, and Star Wars for example.) But I do know enough Star Trek to get the references in this movie. I also know plenty of people who geek out on Star Trek as much as Wendy. (Speaking Klingon is more common than one might think!) And Wendy's obsession with Star Trek fits perfectly, especially her identifying with Mr. Spock. Spock, probably the most recognized Trek character is half-Vulcan half-Human. Vulcan's are a humanoid race known for being very logical and non-emotional. Wendy is also very logical and unemotional.

Which is why this is a great Star Trek movie, without being a Star Trek movie. I won't go into details about the plot, but the plot wasn't my motivation to write this. Just watch the movie, and tell me if you agree! Okay?

Thanks for listening.
Posted by Steven at 10:19 AM 2 comments: