Here I am ready to review another independent comic I picked up at SPACE, the greatest small-press comic con in Ohio! 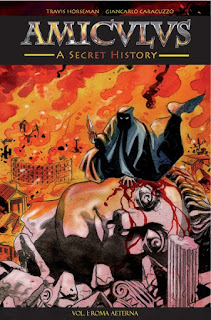 Amiculus (or AMICVLVS in Roman) is the story of the last Roman emperor of the west, a 12-year old boy named Romulus. It is subtitled "A Secret History" as it tells the heretofore unrevealed secret of the conspiracy that destroyed an empire. Or at least, that's what writer Travis Horseman claims. He may also be adding his own little story to a historical tale. But it's definitely more fun to pretend this is all real. After all, if Abraham Lincoln was the greatest President and the greatest vampire hunter...

Anyway, the point is that this story is based on the real Roman Empire, which was divided into two parts in the 400s and the western portion fell to barbarian hordes. This is, I think, a really cool time in world history. If you have no interest in such things, don't worry, this is also a great story of intrigue and betrayal. It begins with an Eastern Empire historian searching for the reason the West fell 60 years ago. This leads him to learning about Amiculus, a figure in the shadows feared by everyone. 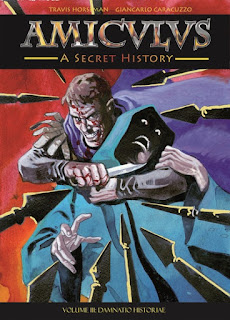 I won't go into details other than that. I will say that I absolutely loved this comic! The writing is edge-of-your seat with suspense as to what will be uncovered by our historical investigator. The pacing is great. And most importantly, you can understand the story without being an expert on the historical time it covers. Finally, the art by Giancarlo Caracuzzo is fantastic!

So I have nothing bad to say about this comic. I'm so glad I picked it up and I hope you will to! Volumes I and II are available here!
Posted by Steven at 9:57 PM No comments: