Woodstalk is a comic series I picked up at the Genghis Con.  It’s a great idea and one of those comics I wish I had thought of! As the title implies, it tells the forgotten story of the zombie outbreak at the most famous music festival ever, Woodstock.  Writer and pencil artist Bruce Worden intends to cover the entire festival, having each issue cover the time during the performance of each act at Woodstock.   But the real stars aren’t the actual performers that played those days, but rather…the Zombies! 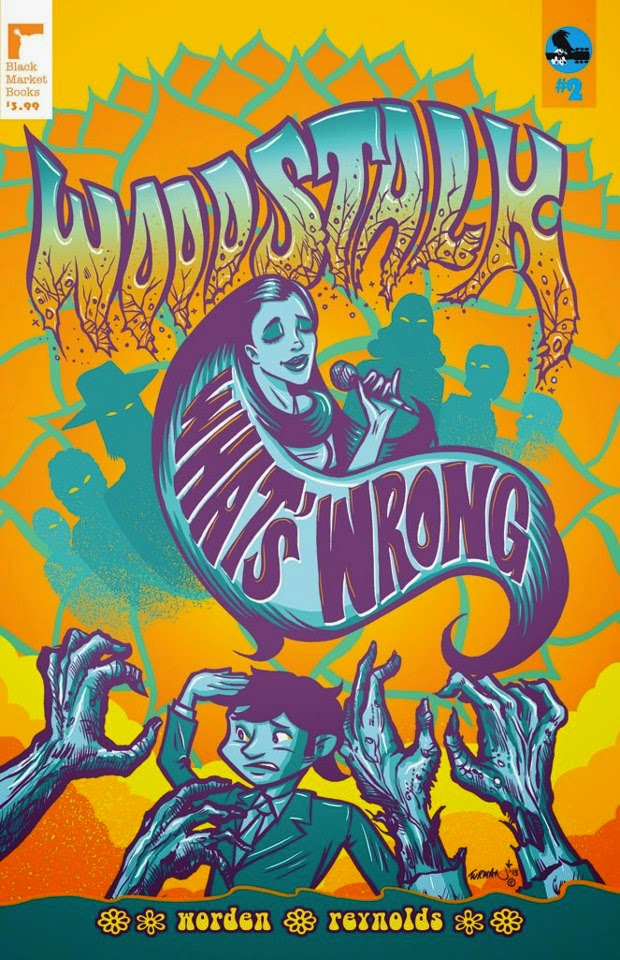 No, I don’t mean zombies.  I mean The Zombies, the British rock group that in reality split up right before Woodstock began.  If you don’t know who the Zombies are, you need to go learn some music history.  I’ve been a fan since I was in High School and first heard “Time of the Season”.  Along with “She’s not There” you have two of the most amazing sounding songs of the era.  The rest of the Zombies’ catalogue is also quite good.

Anyway, back to the comic.  The Zombies show up hoping to get  some time on stage at Woodstock, even though they aren’t invited, which is funny to begin with.  However, they soon find themselves surrounded by young people mindlessly staring off into space.  And then they encounter some zombies!  (Basically the same thing except flesh-eating.) The zombies have to fend off the zombies, trying to stay alive while trying to get on stage.  They have some knowledge in the area of mysticism, which they put to good use against the undead hordes.  All while no one else notices. 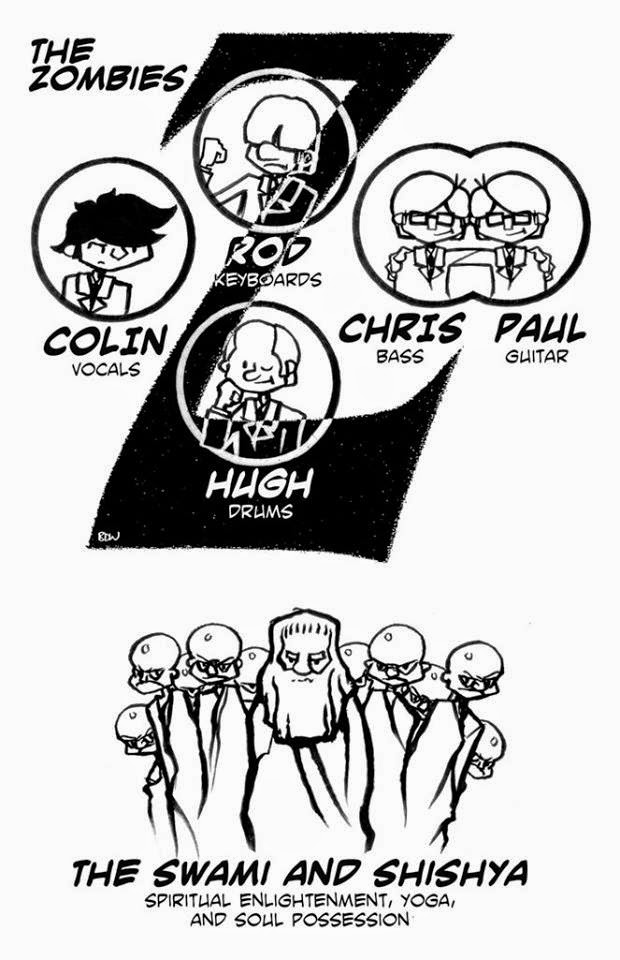 I’ve finished the first 3 issues of Woodstalk, and I await more.  The first issues each feature a different inker, but the art is solid in each. And the story is well told, clear and fun!

Despite my love of 60’s music, I’m not familiar with a lot of the acts at Woodstock (too folksy for my taste I guess) but it’s great to see a young creator with appreciation for older music. And I lok forward to seeing CCR, though I know that's not coming soon...

It’s about time I got back to writing my reviews of the last episodes of season 3 of Out With Dad.  Getting it Out begins with Nathan talking to Johnny, at first about Rose’s predicament at school, but most importantly about the upcoming barbeque and Angela being invited.  Nathan is worried about Angela’s presence because of “how he gets” during the event.  Johnny ends up volunteering to talk to Angela about Sarah (Nathan’s deceased wife).

Back at school, Rose meets with her principal, intent on revealing everything about the bullying she’s been experiencing since she was “outed”. Mr. Gladstone is very understanding, and emphasizes that Rose’s safety is more important than other students’ (or their parents’) religious beliefs, even in a Catholic school.  Then comes the twist, when Mr. Gladstone comes out to Rose.  He even admits he could lose his job if word got out.  This is rather sad, because it indicates that he is not able to be himself and work for the Catholic school.  It is all too familiar, as where I live a teacher was recently fired after announcing his wedding plans to another man.  Mr. Gladstone’s has a willingness to hide his true self in order to work in his position, but I don’t think I could work for an institution that had such a bigoted policy. 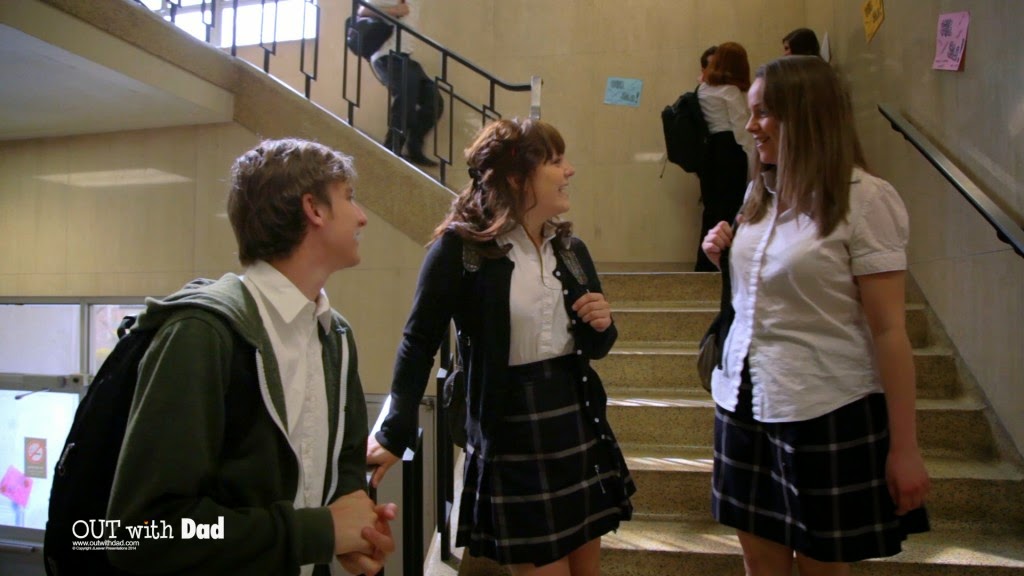 The story continues with Claire asking Kenny about a gift for Rose’s birthday, and him explaining not to get one because it’s weird.  Rose shows up, confirms the “no gift” rule, and holds Claire’s hand while telling her about the conference with Mr. Gladstone.

The next scene has Johnny talking to Angela about how Sarah died.  It’s incredibly sad.  It does explain the special relationship between Rose and Johnny, which was a very nice touch and not something I had thought about before. So I think it was a great idea to include this scene.  Besides, it’s always nice to see more of Angela!

And then the episode ends with one of the funniest scenes of the series, as Nathan agrees to come out to his parents as a father of a gay teen.  It’s one of the most naturally acted scenes, too!  It’s just incredibly cute!  Well, this episode seemed to have it all….but the best is yet to come!!
Posted by Steven at 12:48 AM No comments:

On November 30th I attended my first Genghis Con in Lakewood, Ohio. The small press/independent comics show is a one-day event near Cleveland.  I was a bit concerned about how turnout would be because even though this is not the first year for the con, it was at a new site.  The site, known as the Screw Factory may not look like much on the outside, but the space inside was very nice for the participants and there were plenty of attendees circulating around the artist tables.  I had a great time, sold some stuff, and met Tom Orzechowski.  Tom is a famous comic book letter artist whose work I have admired for decades!

I’d like to thank everyone who stopped by, talked to me, bought or traded stuff with me, or even those who came by and I didn’t have the pleasure of meeting. I plan to be back next year!

I don’t have any pictures of the event, so I’ll just post some statues I’ve made recently. 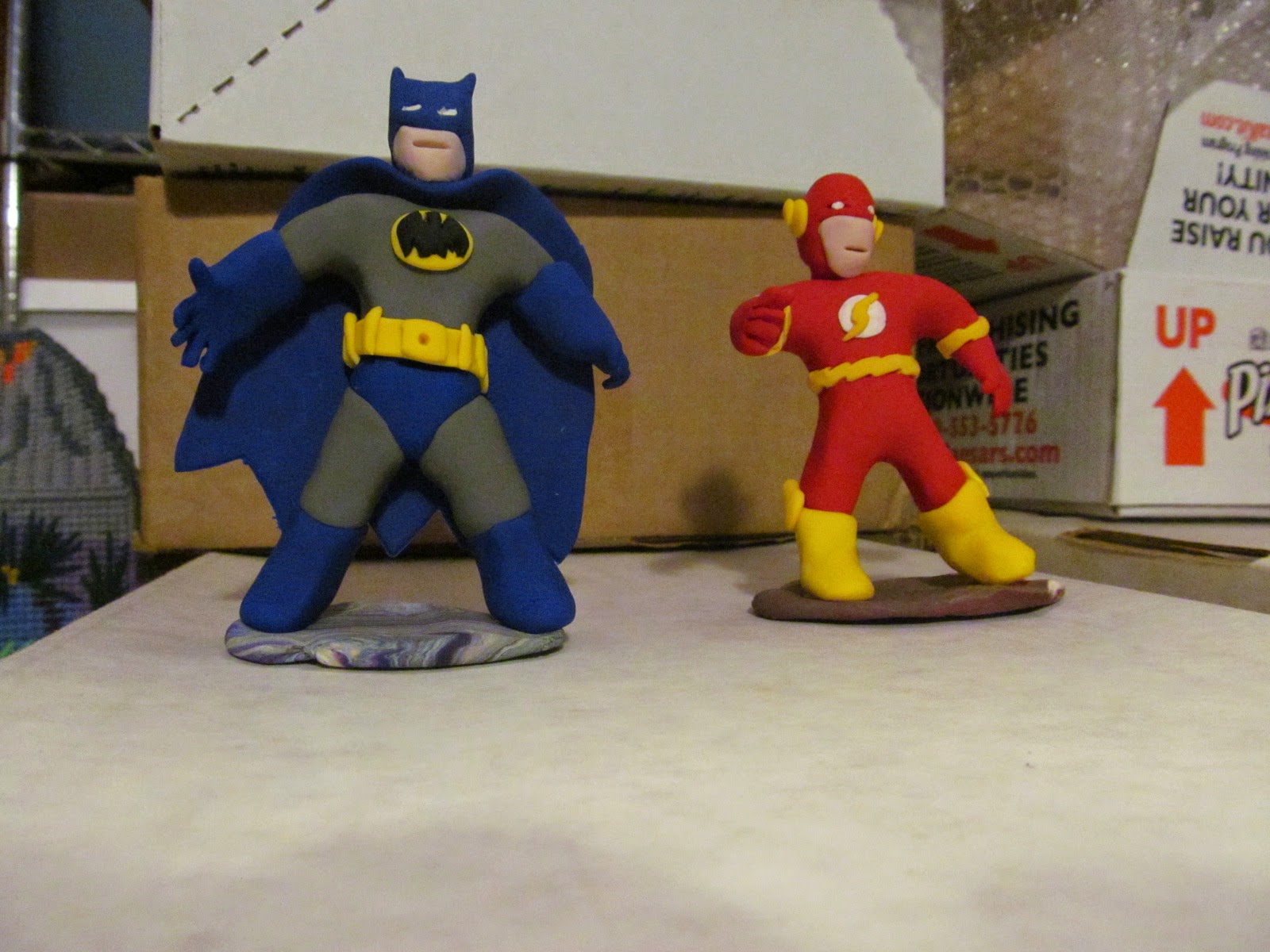 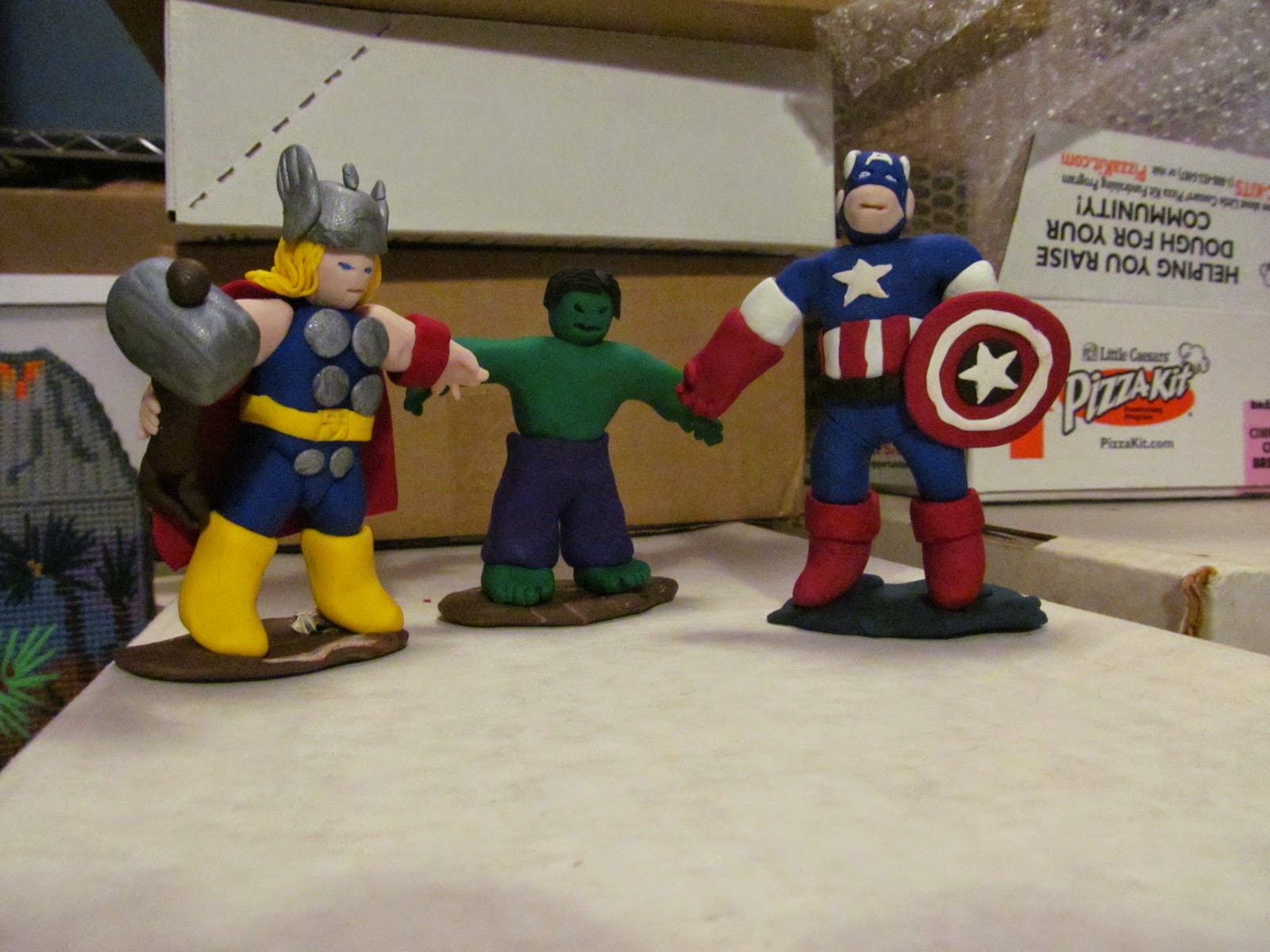 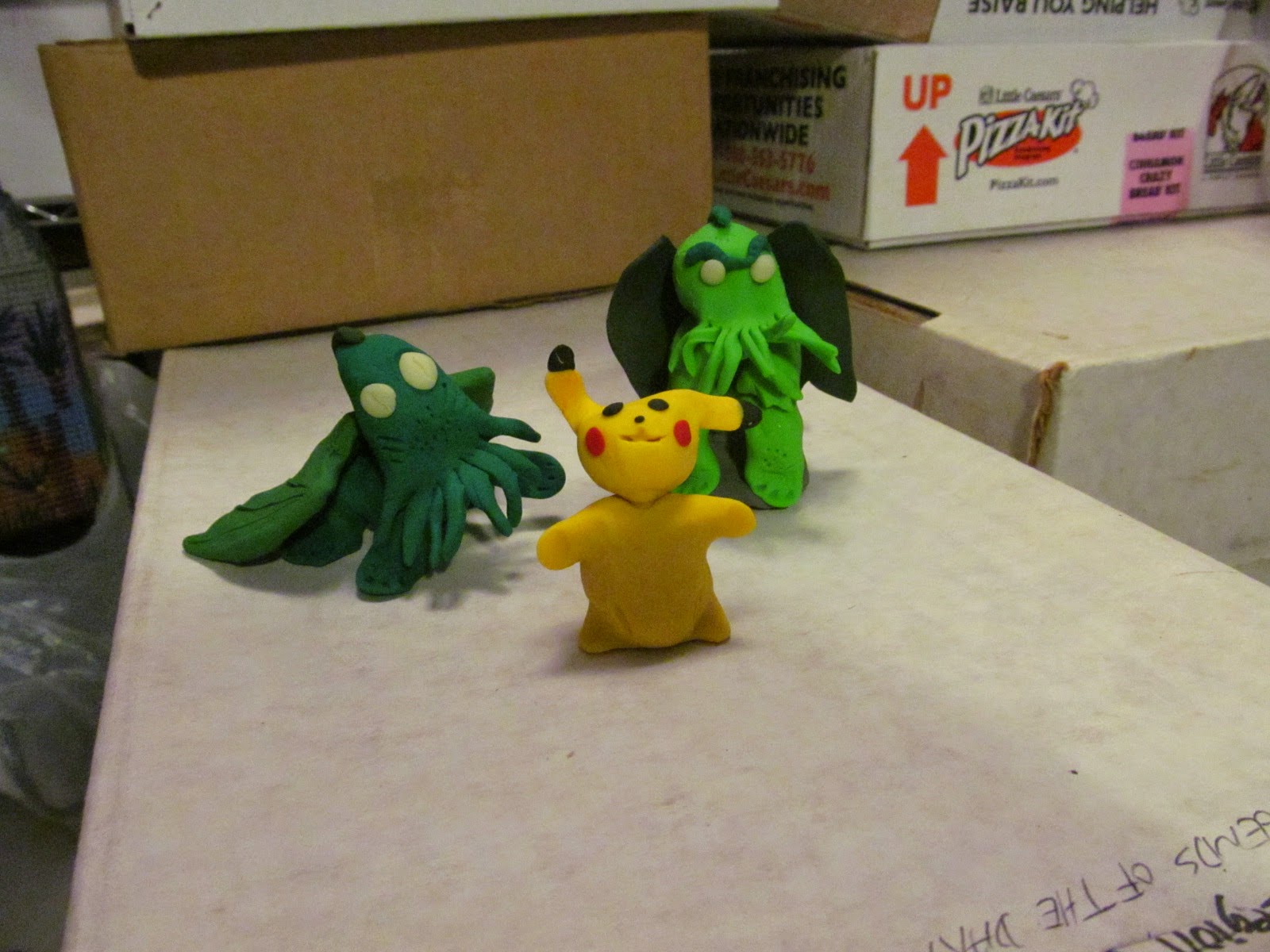