I've been doing some painting recently, so in lieu of another review today, I thought I'd share my paintings. All are acrylic on canvas board. 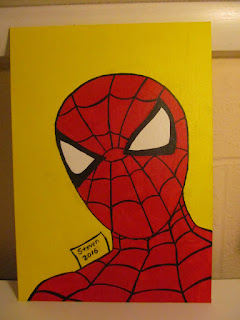 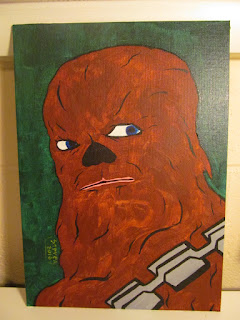 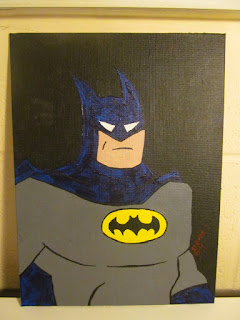 My goal was to do some very cartoony paintings, as opposed to trying for realism. I think it worked well and I intend to do more.
Posted by Steven at 2:14 PM 3 comments:

Herein I continue with my reviews and commentary on things I've read or watched recently.

In this case, the first collection of the Transformers vs. G. I.Joe comics by Tom Scioli and John Barber.

Allow me to reminisce about my earliest G.I.Joe and Transformers memories. I have the first 30 or so issues of Marvel Comic's original G.I.Joe run from the 80's. I watched a lot of the first few seasons of the cartoon.  The toys were pretty neat, but I was too old for toys by then. My G.I.Joe toys were the "adventure team" run from the 70's which were big dolls with changeable clothes and weapons and stuff like "eagle eye"s and "kung fu grip". But the newly re-imagined team was quite fun, and the early Herb Trimpe art in particular I found very fascinating. Around this time the Transformers premiered. I watched the first few seasons of the cartoon, but didn't get the toys or read the comics. I think the downfall of both franchises, to me, was the constant addition of new characters and shuffling of older characters into the background.  The toys were the big money makers, and the shows and comics became too much advertising for the sale of the toys. Character development wasn't a priority, and that, coupled with my age, led me to dropping interest and moving on to other things. But the ideas were still very cool. 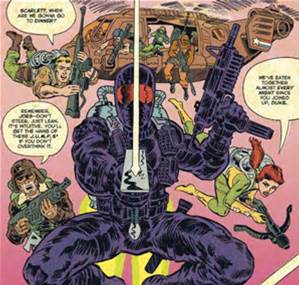 So what could get me to buy a Transformer/G.I.Joe crossover comic in the present? Honestly, It's Tom Scioli.  I met Tom many years ago at the SPACE convention, and loved his work on his own  creation, 8-Opus, a very 70's Kirby-inspired sci-fi series.  I've read many of Tom's comics since, but this is the most mainstream series he has worked on.  His old-school art style really fits the subject here. I'd say he draw the characters, both Joe and robots, to look like..toys! Yes! He doesn't try to imagine these toys as realistic machines or military guys. In fact, such a thing would be silly if you look at the outfits worn by the likes of Shipwreck or Wild Bill or Constucticons.  Instead, Tom embraces the ridiculous nature of the toys to make a universe that looks like it makes sense within itself without trying to make it "believable". 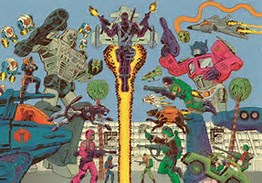 The story, which Tom write with John Barber, is exciting and makes very good use of the characters and their strange specialties and quirks.  There's very little in character difference beyond their weapons and specialties, except for a few main characters such as Snake Eyes and Duke.  The emphasis is on what each member brings to the team in their specialty.  On the Transformer side, we get the shocking realization that this series begins with the Autobots having lost the war, Optimus Prime is gone and Megatron rules Cybertron.  When you start with that, you get some real drama as the surviving Autobots try to stay alive while hoping to some day knock Megatron out of power.

And everything is a lot of fun!  I look forward to reading more toy vs. toy action!

Posted by Steven at 3:53 PM No comments:

First let me make note that I have not been keeping up on my blogging here. I can make many excuses as to why not, including being too busy and not feeling well.  Also, I've been way behind on my reading list (or reading stack of books). But the truth is, I haven't felt like writing lately.  Writing is very difficult for me, at least in comparison to drawing or talking, and I haven't had the mental energy to get my self behind the keyboard and get going. But I am going to try and write as much as I can in the next few weeks, just to get myself back in the habit. I thought I'd start by looking at some of the stuff I've been reading lately. 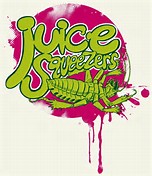 Juice Squeezers is a wonderfully creative take about bug squishing kids. I remember being introduced to these kids in Dark Horse Presents, and when I saw the trade paperback at a con, I decided it was worth picking up.  And it certainly was!  Writer/artist Davis Lapham tells a very engaging story of a town in California with a big of a giant insect problem.  To combat this problem, the town secretly sends Jr. High kids underground to kill the bugs. 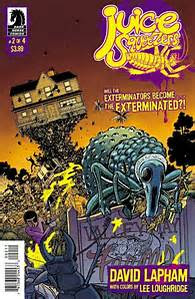 There's lot of intrigue on two fronts.  First, there's the mystery of the bugs. What are they, why are they here, and what are they doing?  There's even some nice moral questions as to whether or not killing large populations of possibly harmful insects is a good idea.  Also, how many people should know about the threat of the bugs? Next, is the personal trials the kids are put through.  There's strife between team members, fights with bullies at school (the kids might be good at squishing bugs, but they aren't great at fighting humans), questions about family, getting along with the new kid, and budding romance.  The mystery is compelling, but the personal issues are the heart of this book. David does an excellent job giving each kid (and the lesser-seen adults) a distinct personality with highlights and flaws.  Despite their strange job, the kids all act like real people.  They just belong to a rather exclusive club. 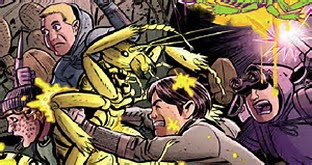 The paperback is small, or digest-sized (9 in, x 6 in.), which is nice and keeps it affordable and cute! I think every Jr. High library needs a copy of this on its shelves and I hope David produces some more Juicy bug-squishing tale