I recently finished reading volume 2 of the adventures of Cleveland's greatest new hero, Apama! Apama is the comic I called "the comic I’ve been waiting for for years"  after reading the first issues in the initial collection. The adventures continue in volume 2, and just get more offbeat and quirky, while keeping the Bronze-Age feel that worked so well in the first volume.

For the life of our main character,  Ilyia Zjarsky (secretly the super-powered Apama) Volume 2 is almost too brutal! Writers Ted Sikora and Milo Miller never give Apama much of a break. Our main character is trying hard to be a hero, but he's really having trouble living out his dreams. He's unable to stop the evil Regina, for example. In fact, Ilyia seems pretty scared of her, and I think I would be too! Also, Apama can't keep his love life together, and his super-persona is becoming the least liked hero in Cuyahoga County!

I was surprised with the twists in the love life of our protagonist. I really thought his pairing with Vica was something special. Now, not only does she flee from his affections, but we find out her attraction to him may be the result of the Apama spirit, and not Ilyia's great personality.

And I can't write this without mentioning "Ten Cent Beer Night", a hilarious story based on the all-to-real disastrous promotion the Cleveland Indians once attempted. The results of which in the Apama world are even worse!!

The art by Benito Gallego is as good in vol.2 as it was in the beginning, and I found myself often staring at the pictures and forgetting to read on in the story. 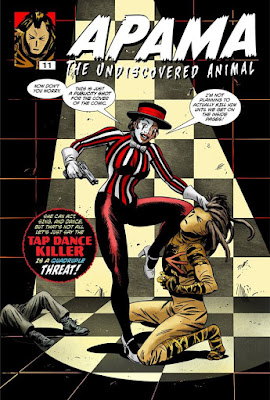 Finally, I must mention the Tap Dance Killer, the greatest creation since Apama perhaps. She's a great villain who isn't really a villain, and she's funny and scary at the same time. I also read the first issue of the Tap Dance Killer spin-off comic, and she's even better as the start of her own book, as it fleshes out the character even more. Nicolaus Harrison's art isn't the same as Benito's, and I honestly like Benito a lot more. Harrison could use more organic inks, with less of a scratchy look. Storytelling is very solid, though!

Now I'll try to write a conclusion. How's this: Apama continues to surprise me, with plot choices I don't expect. an almost too real journey of our main character trying to be a hero, and super art that melds perfectly with the writing style to create something the likes of which hasn't been seen since 70s Marvel. I hope this encourages others to do great super-hero comics also!
Posted by Steven at 8:45 PM