The Apama is the most ferocious animal that has ever existed.  What's that you say? You've never heard of the apama?  Why, of course not!  It is, after all, the UNDISCOVERED animal.  That's right!  The apama is the meanest, most deadly, of all beasts, yet no one has ever heard of it...until NOW!

Apama is a truly wonderful independent comic book created by some film maker from the Cleveland area.  The story even takes place in the vicinity of Cleveland,  Yes.  Cleveland, Ohio, Which might also explain why no one has discovered the apama, since everyone ignores Cleveland. Anyway, creators Ted Sikora and Milo Miller created Apama as a film project about a super-hero. Then they created the comic that the main character in the movie was trying to create.  Got it?  Well, you don't really need to know all the background to understand the comic, because it's just about the comic character. 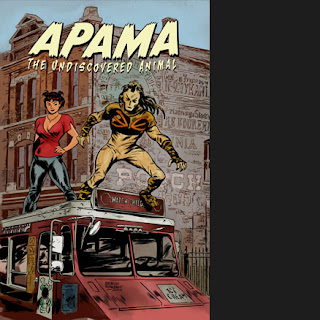 The main character is Ilyia Zjarsky, an ice cream truck driver, who is obsessed with old Native American legends and eventually gains the power of the apama, a ferocious beast that disappeared form history because it was a loner.  Ilyia is also a bit of a loner, probably due to hid being so weird and kinda a loser. There's nothing really remarkable about him. He's just an average Joe.  Or a bit below average really.  He tries hard, but he's not confident in himself, and he messes up a lot.  He's just enough of a sad sack to be hopelessly funny and not miserably depressing.  In other words, he's a great character.  Someone you can root for, but doesn't have the easy path to victory.

But I must now tell you of the thing that attracted me to Apama in  the first place. Benito Gallego does the best John Buscema imitation I've ever seen on the pages of this book.  And I mean that in a totally positive way!  Benito captures the very best qualities of Big John, who is my favorite comic artist of all time!  The art if wonderfully 70's-Marvel, which fits the story perfectly. I just can't really say more but to show some examples here. 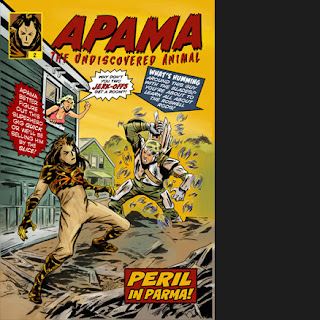 Apama comes with  my highest recommendation!  This is my favorite comic I've read all year!! In fact, I'd say it's the comic I've been waiting for for years!

I eagerly anticipate more!
Posted by Steven at 10:25 PM