Well, if I start now I should be able to catch up on my Out With Dad review/comments before the next episode is released.  So here goes episode 4.03: “An Island Outing”.

This episode takes place on an island.  Of course.  Rose and Nathan are spending some time together much to the joy of Dad (Nathan) who wishes he could spend more time with his daughter.  During their island adventures some important happenings come up in conversation.  They begin discussing Kenny, who is apparently doing something with his life other than seeking further education.  Kenny was never much into the books and school, so this makes sense.  Rose notes how different Kenny and Alicia are, which makes it a wonder they were ever a couple.  Though they are both very caring people who are great friends to Rose, this alone didn’t keep their relationship going after High School.  This, as Nathan notes, is rather typical of what happens as people grow and mature. 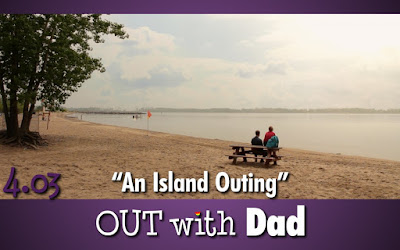 Next the duo discusses Valerie, a woman Nathan dated when Rose was younger. Though Valerie and Nathan got along well, in the end it was Rose that split them up.  At least, the fear of parenting eventually scared Valerie off.  Rose gets upset that Nathan always seems to use Rose as an excuse for not having romantic relationships. Then they discuss some closure Nathan had by meeting Valerie at a convenient store.  This leads to discussions of Rose and having some closure with Vanessa or Claire.  We learn that Rose and Claire avoided each other for 3 years of High School.  I find it a bit surprising that Clare stayed in the school where she was treated badly and wasn’t allowed to have a GSA, but maybe that was her way of not giving in.

At the end Nathan mentions that there might be more to Vanessa’s story than Rose is aware of.  Besides the clever choice of words, I hope this will lead to us finding out about Vanessa’s current life soon.  Despite the happy ending of “Vanessa’s Story” she is certainly has confronted and is confronting a whole different level of challenges than Rose.
Posted by Steven at 6:31 PM