Season 4 of Out With Dad has begun and I haven’t written anything about it yet!  So, here I am to give my commentary and ramble on about what the series has me thinking about right now. It’s great to see the story of Rose and her Dad continue, and it’s interesting to see that creator Jason Leaver is using a new method to fund the series.  I won’t go into the details, since you can check them out for yourself on the Out With Dad website. Instead, I’ll comment on the events in season 4 so far. 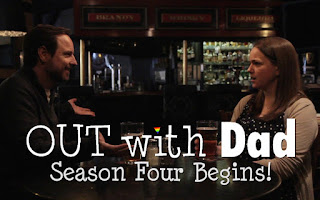 First, let me say something in general about season 4.  Jason has chosen to pick up the series several years after season 3 ended.  Rose has just turned 19 and is in her first year at University.  I think it works very well for the series to pick up here, as opposed to trying to continue exactly where it left off. Partly because the actors have noticeably aged, but also because the high school setting had pretty much been exhausted for interesting plot threads, since Rose was out and dealing with it.  I’ve had thoughts since the end of season 3 about where I would take the personal relationships from that point, but I think OWD is about more than who Rose (and Dad) are dating.  The series exists to present realistic scenarios about what it is like to be gay and to be supportive of someone else who is gay, and how life if different for someone who is homosexual.  It’s about the unique challenges of Rose and her Dad and the societal challenges that someone like Rose has to face that someone like me (not gay) never had to face.  This aspect of the show is what I’m most interested to see as to where the story goes from here.  Oh, and I’m also curious as to who Rose will be dating! 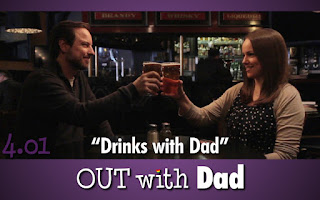 Episode 4.1, “Drinks with Dad” catches us up with the lives of Rose and her Dad since season 3 while they have a drink together to celebrate Rose reaching the legal drinking age in Canada. We learn in this episode that Rose is going to college, still lives at home, and still regrets the situation at the end of season 3.  It also establishes that Rose is not dating Claire or Vanessa, and that this shouldn’t be surprising since very few people marry their high school crush.  It also talks some more about Rose’s mother, and how she and Nathan met in grade school and married young, but he doesn’t want Rose to think she’s failed because she hasn’t done the same.  We also learn that Nathan is in counselling to deal with the loss of his wife, and he thinks he’s finally dealing with the loss after all this time.  Perhaps raising Rose was too much of a distraction and Nathan never stopped to deal with his feelings.  Hopefully, this foretells a future love for Dad?


Okay, I was going to review the next episode also, but I’ve spent too much time on this one.  I’ll get to it soon. I promise!
Posted by Steven at 10:52 PM